A classically inspired Duluth home captures the spirit and passion of its gracious owner. The formal living room of designer Beth Elsey’s Duluth home is a polished showcase of splendor. Its furnishings including the Dessin Fournir sofa, John Boone cocktail table and Holland & Company chests were purchased by Elsey over the years. I think things should be collected over time, she shares. It’s better to wait and buy something of good quality with the intention of keeping it than to think everything is disposable. Homeowner Beth Elsey, with her Labrador Emma, relaxes in the formal living room. The stylish table setting in the dining room features glass hurricanes and crystal stemware by William Yeoward. Greenleaf china by Anna Weatherly, one of the many patterns Elsey has collected over the years, is set upon custom linens, their monograms matching those of each slipcover. A display niche featuring Chinese porcelain plates from Jane Marsden Antiques is further evidence of Elsey’s passion for delicate tableware. 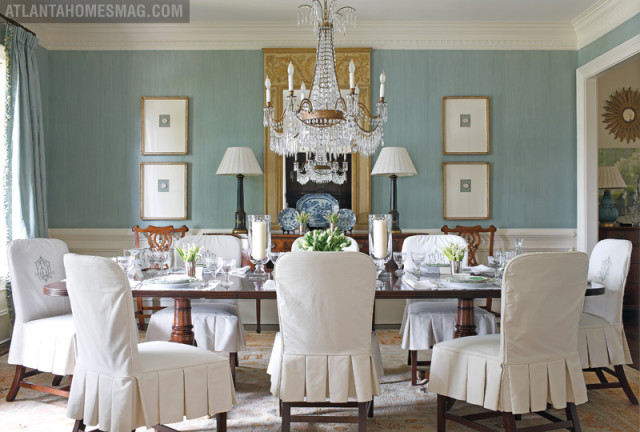 The dining room sparkles in its well-edited details, with pleated slipcovers adding a charming touch around the traditional mahogany table. Meanwhile, a Trumeau mirror brilliantly shines in the light of the crystal Niermann Weeks chandelier. Framed intaglios and silk draperies further enhance the elegant look. Comfortable seating in the keeping room gives Elsey, her husband and their three Labradors plenty of space to relax while two built-in bookcases filled with pottery, pieces of coral, and architecture and design books artfully display Elsey’s passions. Above the fireplace, a contemporary oil painting by Maureen Chatfield, represented locally at Anne Irwin Fine Art, conceals a flat-screen television. During warmer months, French doors leading out to the patio are kept open, extending the entire living area. David Iatesta chairs, described by Elsey as deceivingly comfortable, give life to her beach inspiration. Adding to the effect is a Vaughn lantern and three walls of floor-to-ceiling windows that flood the room with natural light and bring the outdoors in. Chairs and fixture available through Ainsworth-Noah & Associates. Elsey commissioned white painted cabinetry by Bell Custom Cabinetry for the kitchen. A pale blue ceiling and mahogany island add contrast and warmth. Natural light finds its way into the space through the classic radius-top window. Range and hood, Viking. A vaulted ceiling helps create an airy feel, while floor-to-ceiling screens blur the boundaries between indoors and out. Another highlight of this spacious room is the pair of American boxwoods in custom planters. It’s very peaceful to sit out here with my dogs, although there’s been some collateral damage with them punching through the screens when they were puppies, Elsey jokes. Near a Belgian limestone table, a quartet of framed oakleaf and mophead hydrangea prints lend outdoorsy ambience to the screened-in porch. The perfectly tailored master bedroom is Elsey’s favorite space. Luxurious fabrics are in abundance here, from the silk velvet headboard to the Sferra shams, the silk-and-cotton draperies to the monogrammed bedding from Leontine Linens. 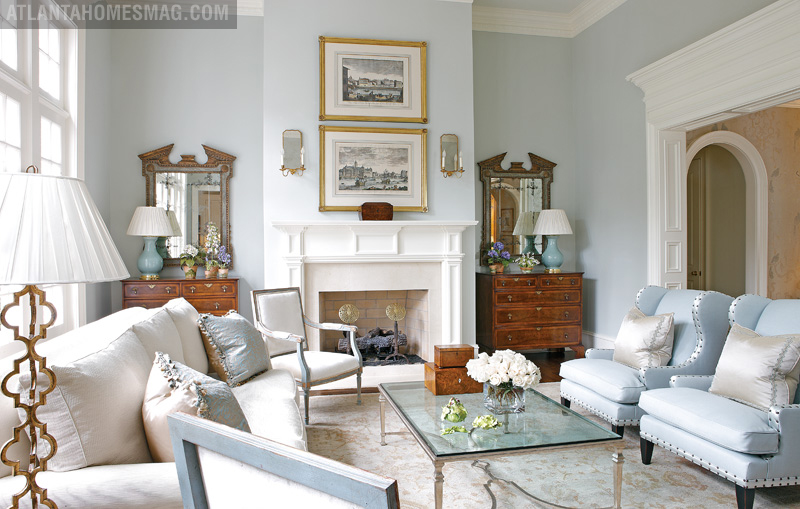 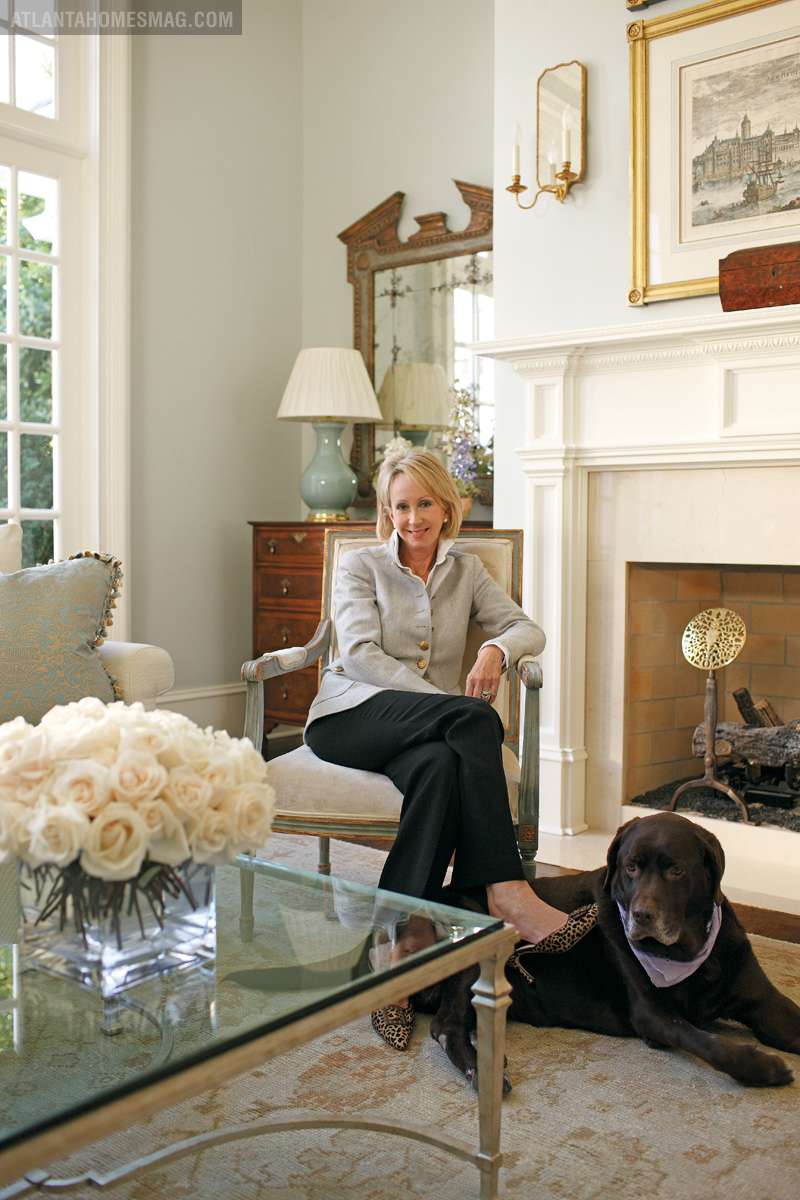 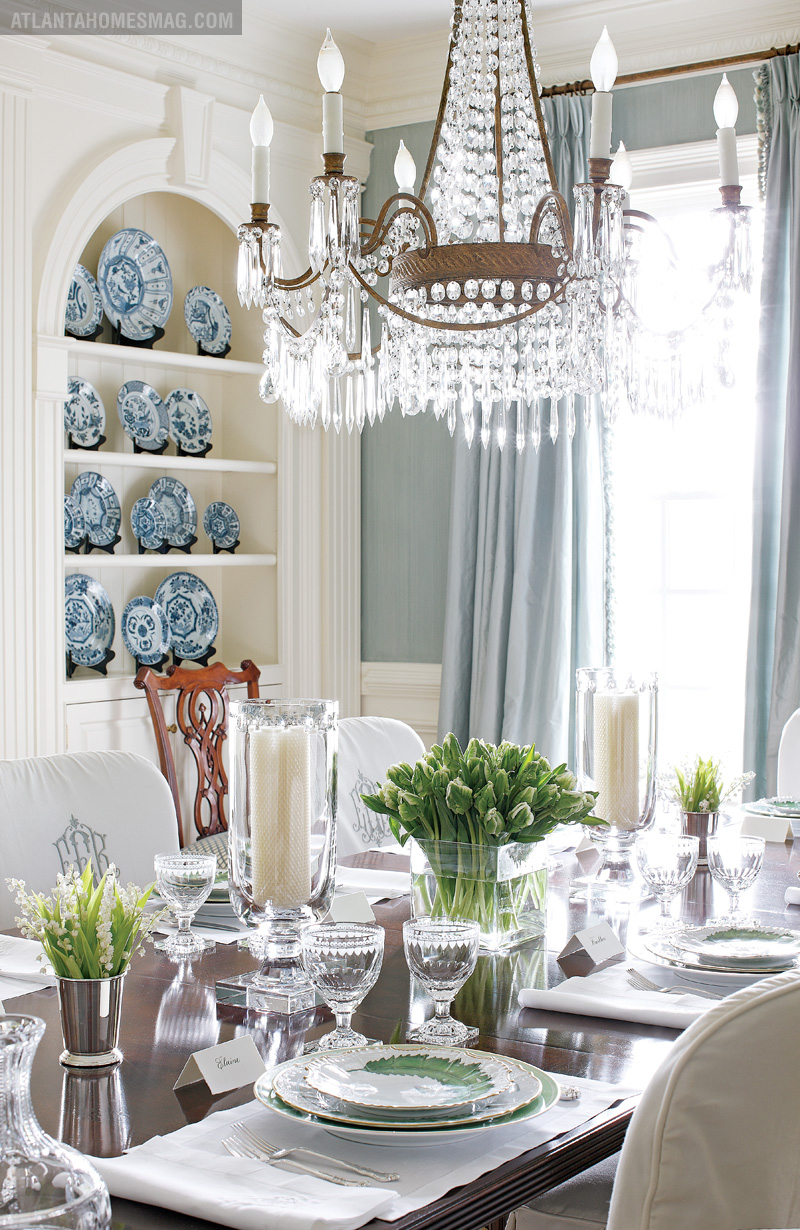 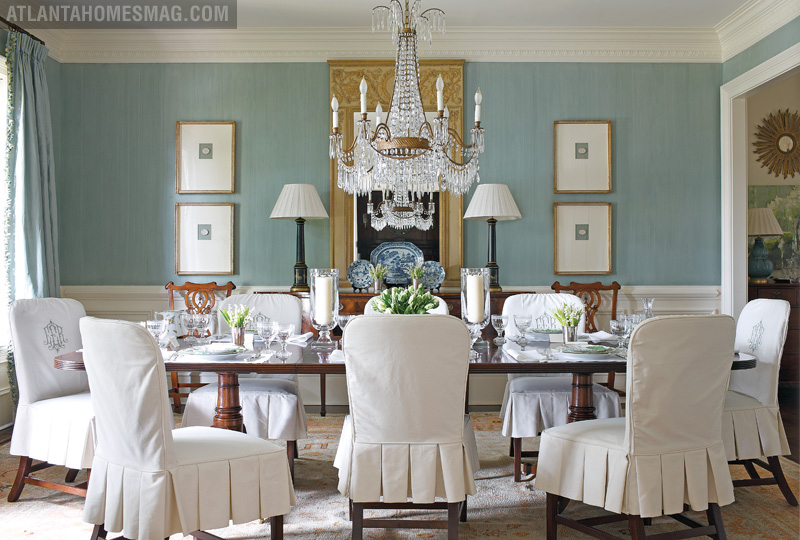 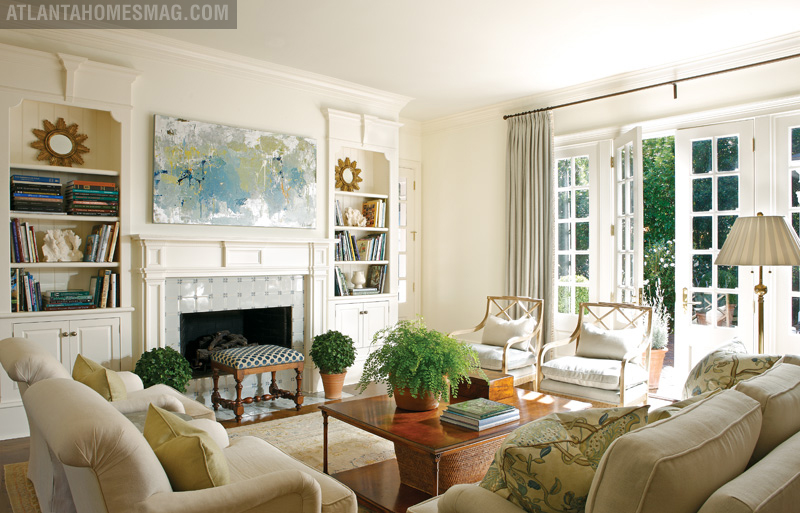 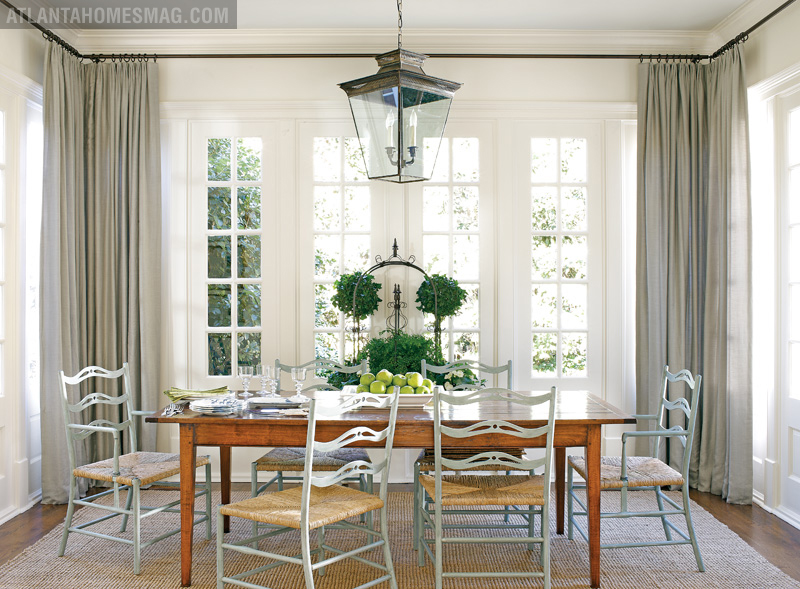 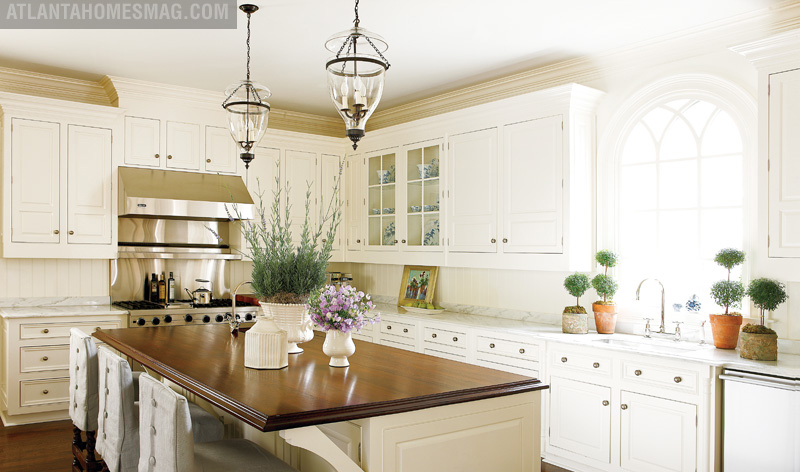 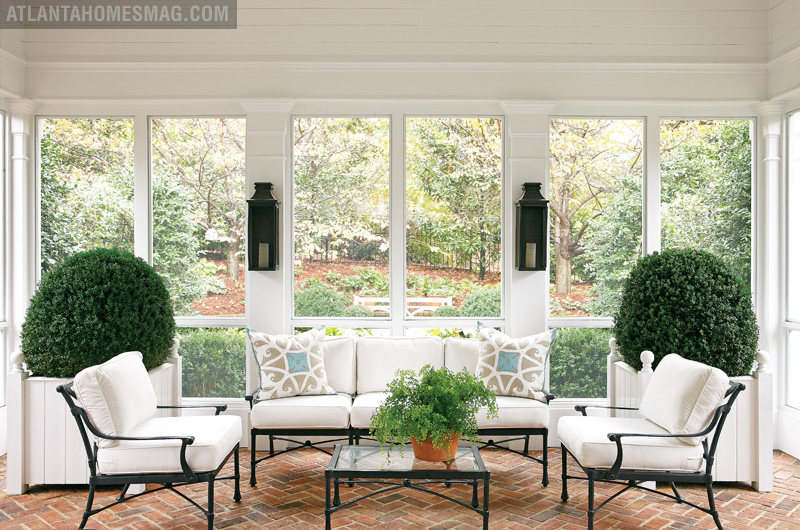 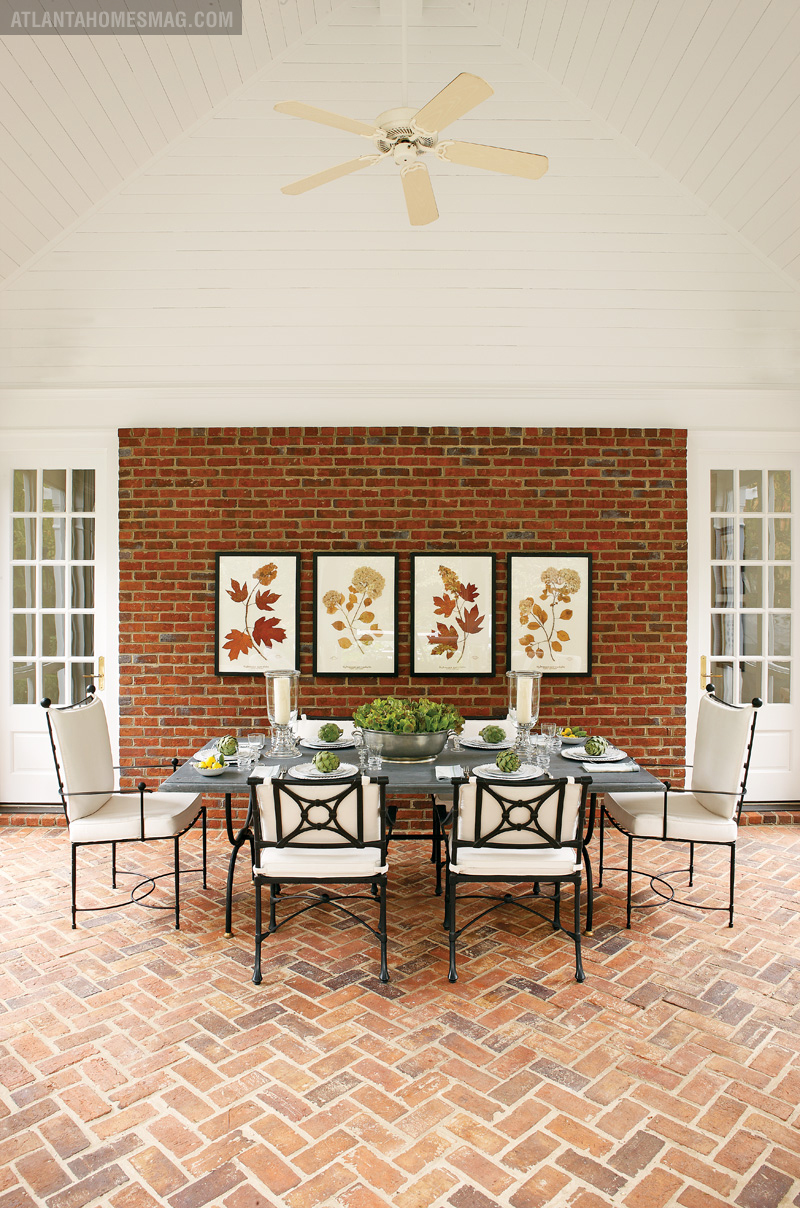 Beth Elsey’s Georgian-style home is a vision of class, elegance and a bit of Southern flair—just like the homeowner herself. It would be hard to guess that this beautifully appointed residence was decorated solely by this one-time nurse, who spent more than 20 years working with needles and stethoscopes. But Elsey’s childhood gives a glimpse into her underlying passion. “I was fortunate to grow up in a family that loved and appreciated art and architecture,” she recalls. “I loved visiting my Grandma’s art studio because there were always different works in progress—oil paintings in one corner and pottery waiting to be fired in another.”

But it was warm summer days spent on the sandy beaches of Dog Island, a tiny landmass in the Gulf of Mexico, which truly planted a love of art in Elsey and her cousins. “We’d stay for four weeks at the beach house and take sketch pads, charcoals and watercolors. We worked on a different project each year; one year we’d do collages, the next needlework,” she shares. “My grandmother encouraged us to do anything in the realm of art, and all of her grandchildren now have some type of artistic ability.”

Elsey’s artistic passion fell into interiors. She left a nursing career in 1997 to open an interiors shop in south Georgia with a friend, the store’s luxe and varied inventory of home furnishings, china and crystal giving Elsey an outlet to share her tailored and graceful style. But her husband’s eventual job transfer meant leaving the successful venture behind, and re-focusing her creative energy on a new home in Duluth.

She drew inspiration from her idyllic childhood summers. “I love the colors of the beach, especially all spectrums of blue, from the water to the sky,” Elsey says. “I also love the whites of the shells, and the neutrals of sand and driftwood. All of those influences dictated the direction.”

The home’s icy blue walls, however, started as light yellow. “Over the past nine years, this home has truly been a work in progress,” she explains. “I think you have to live in a space for a while so you can see how it looks during different times of the day and during different seasons.” But once the walls were transformed, Elsey’s vision began to take shape. Sofas, chairs and other furnishings were soon reupholstered to match the fresh color scheme.

Elsey also introduced new items, such as the custom blue-and-white screen painted by Raymond Goins in the formal living room—the Chinoiserie-style panels a nod to the owner’s love of nature. In fact, several rooms boast views of the plantings she personally tends to, including potted Meyer lemon trees on the back patio that are visible from the screened-in porch. “I’m assuming most Southerners have a similar experience, but I can never remember my mother buying flowers. We used whatever was growing in the garden,” she shares.

The home’s classical style is also a testament to Elsey’s love of symmetry; mirror-image seating arrangements and paired accessories give each room a balanced and calming ambience. And although Elsey refers to her style as elegant and ordered, she quickly adds, “it’s important to keep your sense of humor about your home. It doesn’t need to be so perfect that you’ll break down if something is broken.” Her three beautiful Labradors, Emma, Sophie and Olive, are allowed everywhere and have inevitably left their mark. “Yes, they chew on the furniture, but it gives it character,” she laughs.

Essentially, it’s a reflection of Elsey’s gentle demeanor and that, after all, is what a home should mirror—the owners themselves.

Color Theory
For the blue and white paint colors in her own home, designer Beth Elsey selected an array of soft and pretty hues.