When crafting an elegant and comfortable pied-à-terre, interior designer Andrew Howard took his color cues from the Atlanta skyline, creating layers of blue and shots of pink

Photographed by David A. Land The custom rug in the dining room has seven shades of blue that Andrew Howard continued throughout the condo. The seascape painting is a reminder of the owner’s hometown of Jacksonville, Florida, and is from Mrs. Howard in Atlanta. Side chairs, Mitchell Gold + Bob Williams in Peter Dunham. The tailored living room shows off a mix of pretty pattern, with the view front and center. Cabinet pulls, Ochre through R. Hughes. Chairs, Mr. and Mrs. Howard for Sherrill, upholstered in Walter G. Curtain fabrication by Willard Pitt. Lamps, side table and accessories, Mrs. Howard in Atlanta. 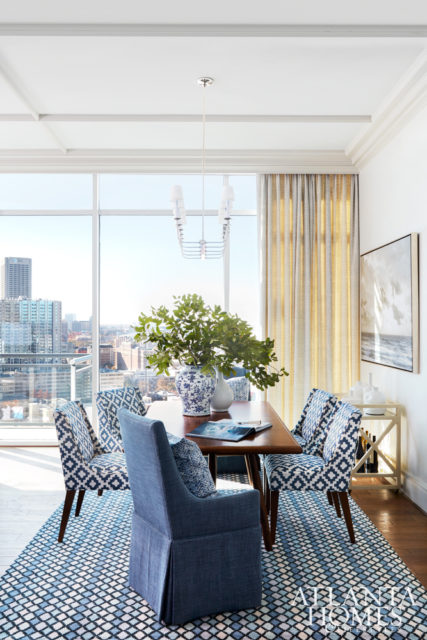 The horizontal light fixture in the dining room is hung higher than average so as not to block the view from the adjoining kitchen. Blue linen host chairs, Lee Industries. Chandelier, Visual Comfort. The petite kitchen is big on style with a custom tiled New Ravenna backsplash in a flower pattern. Pendants, Visual Comfort. The master bedroom’s atmosphere has hints of glamour that spring from the velvet coverlet, faux-fur throw and custom wallpaper on the ceiling by Stephen Floyd Design. The foyer sets the tone for what’s to come with its feathery blue-patterned Twigs wallpaper. Sconces, Urban Electric. Views of the Atlanta skyline inspired the condo’s color palette. “Space is everything in a small condo,” says Jacksonville, Florida–based interior designer Andrew Howard. “You have to choose each piece very purposely, and in this case, I didn’t want anything to compete with the views.” With that in mind, Howard flowed layers of blue throughout the rooms with well-edited choices at every turn for Meredith Leapley’s high-rise Atlanta pied-à-terre.

Comfort is an essential ingredient in the design as well. “Meredith uses this condo when she’s here on business, so I wanted everything to be soft and relaxing when she gets home from the workday,” says Howard, who used faux-fur throws, generously proportioned upholstery and roomy dining room chairs covered in a practical outdoor fabric to achieve that effect. “In a small space, people often work at their dining room table, so you need to feel comfortable being there with your laptop.”

Other practical ideas lurk among the pretty. The petite foyer includes a scallop-edged white console table with a basket to tuck away dog leashes and a bowl for keys and mail. “You really have to think about how your client lives in the space, not what the decorator wants. It has to be functional,” notes Howard. Of course, in this condo, practical is never dull. The foyer also shows off a striking wallpaper in shades of green, gray and light blue that resembles wispy feathers making an engaging first impression.

What the condo lacks in size, it makes up for with custom details that bring a bit of drama to the space. A couple of those enliven the master bedroom in particular. The ceiling, covered in a hand-painted wallpaper, gives off the effect of mosaic tiles, drawing the eye up. “The pop-up tray ceiling was a builder-model-type treatment,” says Howard, “but instead of trying to disguise it, we made it more impactful.

The feminine, curvy upholstered headboard, embroidered with circles evocative of the rising sun, is another striking feature. “The design went through many evolutions, and a lot of hands went into making this piece,” says Howard, “so there is a story behind it, which gives it another dimension.”

The pink side of the Atlanta skyline represents a sophisticated, insouciant attitude in the room, as Howard explains: “Pink can be a lot more transitional than you think. It doesn’t have to feel like a 7-year-old girl’s room. The color should not be off-limits, especially in a bedroom.” And it all circles back to the jumping-off point for the design. After all, who wants to compete with blue skies and pink sunsets?