Renovations by the previous homeowners saw the removal of the second floor, which created a soaring ceiling in the dining room. But when these homeowners moved in, designers Carter Kay and Nancy Hoof called upon architect William Litchfield to enhance the room’s architectural character using rustic wood beams. The square dining table is from Travis & Company. A dozen dining chairs from Smith Grubbs & Associates surround it, making the room suitable for even the most sprawling of dinner parties. Antique Swedish column, A. Tyner Antiques. Chandelier, Niermann Weeks. Tucked into a corner of the living room is a gathering spot designer Carter Kay likens to a “French salon.” The cozy nook serves as the showcase for the family’s art collection. Anchored by a dining table from the couple’s former home, it is surrounded by comfortable John Saladino swivel chairs. It’s all about the mix in this Garden Hills cottage, where traditional pieces from the owners—previous home of 29 years mingle with newer, contemporary ones, such as Nancy Corzine slipper chairs in tufted Jerry Pair Leather. The antique needlepoint chair, acrylic coffee table and mid-century lamps are all from Travis & Company, while the antique hassock is from William Word Antiques. The sumptuous William Yeoward sofa is from Grizzel & Mann, and the silk-and-wool rug is Eve & Staron. A tall iron console table fills an architectural nook to the left of the front door, providing a pleasing place for the eye to land.

Just beyond the living room, a covered patio is accented with elegant iron furniture from Niermann Weeks, which Kay and Hooff recovered in a fresh fabric. The lamps and console table are from Peachtree Battle Antiques. A tailored foldout sofa from Brice Ltd. in the guest bedroom is perfect for accommodating overnight guests. A tall “Charleston-style” table from South of Market is often used for playing cards. The French wire chandelier is from Travis & Company. The swivel chairs are by Lee Industries. Drapery fabric by Dedar, available through Jerry Pair & Associates. In the family room, Kay and Hooff removed built-in benches that distracted from the metal windows and took up precious space. In its place, the designers filled the expanded corner with a sectional sofa from Brice Ltd. The swivel chairs are from Smith Grubbs & Associates. In the breakfast nook, mounted hooks keep the cushions from budging. The steel breakfast table is from South of Market, and the banquette fabrics are Perennials and Classic Arts. 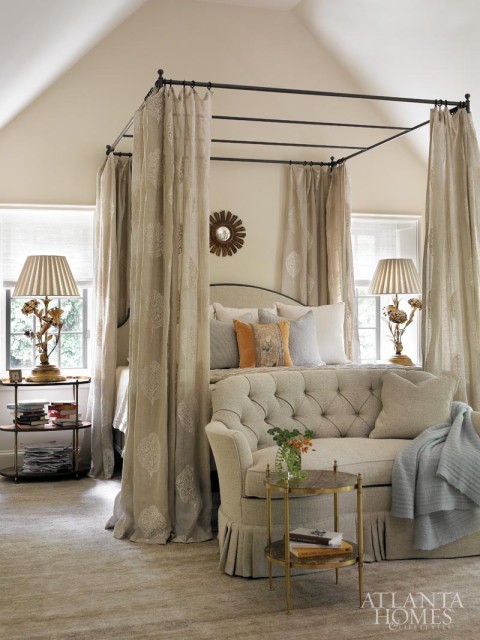 “The layout of the bedroom was Bill Litchfield’s brilliant thought,” says Kay. “He did an architectural treatment to the wall to make it wider, and turned the molding of the windows to create more space.” Now, a king-size canopy bed from Mrs. Howard, dressed in panels of Randolph fabric, can rest here comfortably. Bed linens, Susan Shepherd Interiors. Antique pillow, Ainsworth-Noah & Associates. Linen-and-jute rug, Eve & Staron. In the master bath, framed botanicals from the Atlanta History Center form a charming focal point.

When a Buckhead couple decided to downsize to a 1930s Garden Hills cottage, they wanted a home that would not only appear precious from the street, but also live luxuriously. It was a challenge approached with enthusiasm by designer Carter Kay, who had designed the family’s former home 20 years ago, and had recently worked on their Savannah retreat with design associate Nancy Hooff.

The empty-nesters are members of a passionate, art-collecting brood, and thus have a profusion of inherited and collected fine art. But with fewer blank walls to hang it upon, Kay and Hooff were pressed to get creative, consolidating the collection into a series of eye-catching galleries. In the living room, one of these galleries serves as the backdrop for an intimate seating nook, creating a layered and comfortable space that Kay likens to a French salon. The gallery also presides over an elegant arrangement of new upholstered pieces—a William Yeoward sofa, Nancy Corzine slipper chairs and a classic needlepoint chair, which are tempered by a sleek and thin acrylic coffee table.

In the dining room, Kay and Hoof were careful to create that telltale mix of traditional and modern, of old and new. Case in point: A gilded chandelier holds court over a glass-and-acrylic table surrounded by Smith Grubbs dining chairs, while a bank of metal windows is punctuated by antique columns.

What was most important to the homeowners, though, was adding character to the home. “The husband is a real creative, and one of the more thoughtful men I’ve ever met,” Kay recalls. “In one of the first conversations I had with him, he immediately spoke about enhancing the home’s architectural history.”

The designers called upon architect William Litchfield to make such authentic adjustments, like adding wood beams to the dining room ceiling and expanding a window wall in the master, where a dreamy, king-size bed can now be accommodated without obstructing views or light from the outdoors.

If the whole house reads especially light and bright, that’s partly because it’s painted the same shade of linen throughout. As a result, its spaces are neutral and uncomplicated, yet textured and sophisticated, just like the wife. “She always dresses classically with a twist—usually in khaki pants, with a cream-colored top and a scarf in a great color,” explains Hooff. In fact, her outfits informed many of the decorating decisions. Invariably, the objects she was drawn to would mirror her outfit that day. In fact, it was those kind of cues that influenced the subtle blue-green and curry shades peppering the rooms.

“I think her house looks like who she is and who she’s always wanted to be,” notes Kay. The man of the house, for that matter, seems to feel the same. “He wrote us the sweetest note,” she adds humbly. “He said it was the house he’d always dreamed of owning, but he never thought he’d have.”

Enjoy a lunch hour getaway into three of Atlanta's

Tour our 3D Slab Gallery...from the safety and com