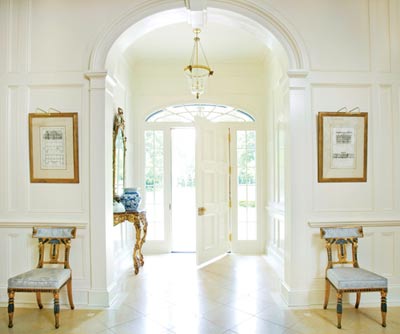 The pair of gilded chairs in the home“s entryway came from the Gianni Versace mansion in Miami Beach, Florida, following Versace“s passing in 1997. Kasler purchased them from William Word Antiques, and loved them so much that she made no alterations“even the blue silk damask fabric is original. The upholstered antique bench just beyond the entry, opposite, is one of Kasler“s favorite pieces in the house. Along with the antique console, “It really keeps everything very tailored and centered,” says the designer. Graphic pillows in a Greek key motif marry classic and modern sensibilities for a fresh touch in the traditional space. “It“s that mix that I try to bring to all of my spaces,” she says. The details of the home“s architecture were so beautiful alone, that a neutral palette served best to enhance them. Ornate patterns are mimicked in the wood-and-gilt mirror and bronze candelabras, while warm woods and French gilt Berg�?¨re armchairs, c. 1880, ground the look. Blue-and-white ceramic urns were used as accents throughout the house, adding an exotic touch to the dining room when combined with the foo dog figurines on the mantel. Slipcovered dining chairs and a broad sisal rug impart a relaxed aura to the otherwise formal space. Linen velvets were used throughout the family room to add comfort, and a cool-hued cashmere throw, tossed lightly over an armchair, suggests curling up for a long, jovial after-dinner conversation. Built-in bookshelves were added by Kasler“s team to enhance the existing architecture, designed collectively by William Frank McCall, Keith Summerour and William H. Harrison. A collection of antique watercolors forms a strong focal point in tandem with one of Kasler“s trademark sunburst mirrors. Set on an intriguing Spanish table, a collection of aged verdigris pieces“including an armillary sphere“serve as playful complements. A zebra skin rug adds the sort of flair and fun that makes the family feel right at home.

In studies of architecture, there is something to be said for great bones. And for many, one northwest Atlanta home is worth more than a line in a textbook; it is a case study in architectural excellence. A shining example of the symmetry intrinsic to English Regency style, its majestic spaces were built by leading architect William Frank McCall in 1983. Within a decade, Keith Summerour transformed the decorative balustrade into a Palladian entrance; in 2006, William H. Harrison remodeled the interiors to be even more magnificent than before.

Considering the masters who have had a hand in its making, many designers would have found it difficult to honor the work of such forebears while instilling an original hallmark of their designs. Suzanne Kasler is not one of them.

“It’s such a significant house in Atlanta architecturally, and having all of these different architects layering their influences on it was a brilliant positive,” says the designer. “When the interiors were complete, it was a truly beautiful space.”

Although the house is generous in size at 15,000 square feet, it was essential that it be comfortable and conducive to entertaining. “The owners are a young family with three daughters and are very involved in the community,” says Kasler. “They love to share their home, and its interiors reflect their success.” Social affairs often spill outdoors, where the verdant acreage surrounding the house becomes as much a part of the backdrop as the architecture itself. The strong setting had a significant influence on the interiors, too, greatly informing Kasler’s understated approach throughout; “detail without over-decorating” was her constant mantra.

The home, which was an Atlanta Symphony Associates’ Decorators’ Show House in 2006, had been turned into something of a blank canvas and was awash in neutrals. Though Kasler and her team chose to repaint some rooms, such as the kitchen and foyer, they loved the subtle foundations and were smitten with a caramel-colored de Gournay chinoiserie wallpaper that still hung in the dining room. Kasler added chic updates, including a pair of antique reproduction French mirrors and a show-stopping antique crystal chandelier, remarkable for its crown of golden spires surrounding a central axis. “I found it locally at Maurice Chandelier,” says Kasler. “It is truly one of the most beautiful light fixtures I have ever seen.”

The family room was the largest in volume, necessitating a careful eye for scale and arrangement. To complement the room’s existing architecture, Kasler and her team installed four built-in bookcases to anchor the room from each corner, filling them with collections of antique books. The scale of furniture, too, was turned up to fill the lofty dimensions. Too small and it would have felt stiff and uncomfortable. The right proportions allow owners—and guests—to feel right at home.
Softness arrives in the form of skirted tables flanking each side of the home’s commanding central stairway, as well as in the linen velvet fabrics and an oversize ottoman inset with an exquisite tapestry. A 16×26 Moattar rug seemingly lengthens the family room but feels downright cozy, thanks to a plush weave and subtle pattern in muted blue and gold.

Save one glance for this space and it should rest on the artful arrangement of framed watercolor landscapes, c. 1856, a sunburst mirror forming the focal point at its center—and tying the room together with a look of ease. As guests pass through the clean, unadorned entryway and over the threshold, many catch their breath at the sight of it. From the first moment, you know: This is a “wow” room. Call it a surprise—but that is what Kasler is known for.