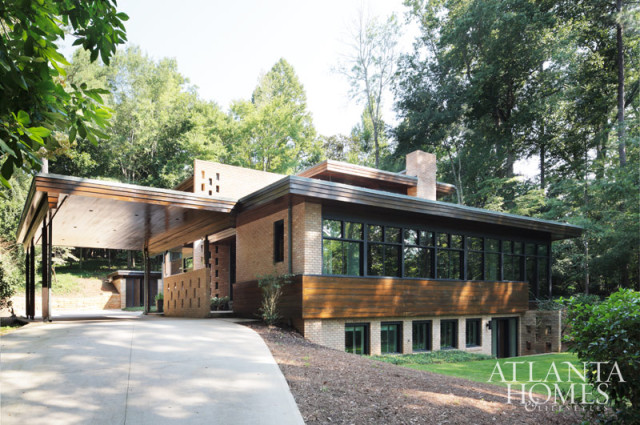 Sophisticated but subdued, the master bedroom gives off the air of a five-star suite. The custom-designed bed (covered in Bramalta fabric) and nightstands, designed in conjunction with Bjork Studio, prove a showstopping anchor beneath a pair of square brass mirrors found at Decades. Vintage cork lamps from Pieces. Window treatments by Ferrick Mason. Morris continued the color palette in the master bath with Zoffany wallpaper and a Roman shade in Zimmer + Rohde fabric; it also features a garden tub, floating mirrors and his-and-hers vanities. A charming study in geometry, this boy’s room is wrapped in Cole & Son Wallpaper. The sleek furnishings are from Ikea, and a pendant was found at Arteriors. A vision in precious pastels, one of the twin girl’s bedrooms was influenced by Osborne & Little’s botanical wallpaper. Nightstands from Worlds Away. Rug, Causeway Collection, by Ulster Carpets. An upstairs hallway doubles as a homework station for the family’s three children and echoes the color palette of Leslie’s artwork on the far wall. The vintage chrome lamps are from Decades and the window treatments are made with Duralee fabric. Setting foot inside Leslie and Richard Wilson’s contemporary Chastain Park home may incite a sudden longing for a dirty martini. The 1960’s-inflected mood—carried throughout their renovated midcentury modern home at the hands of architect Frank Neely and interior designer Amy Morris—fully captures the essence of its storied roots. “Leslie’s mantra was ‘the bolder, the better,’” says interior designer Amy Morris of the home’s fresh new vibe. “As long as it was kid-friendly and approachable, they were willing to try it.”

For years, the light-flooded ranch sat relatively untouched on its hillside perch, until the homeowners found the house and embraced the idea a full-scale renovation. The original house—defined by its simplicity with clean lines and a multitude of windows celebrating the outdoors—was designed by Andre Steiner, a Bauhaus-trained architect and unsung Holocaust hero. After fleeing Europe in the ’40s, Steiner called Atlanta home, and this house is one of his last remaining works. “The goal was to keep as much of the original form and integrity of the house as we could,” says Neely of the strategy to build up. “We went to work on a second story that Steiner would be proud of.”

Neely’s team took Steiner’s chimney up through the second floor, maintained his division of public and private spaces and preserved the late architect’s signature styles: deep overhangs, perforated brick walls and ribbon windows that curve dramatically around the house. “A major focal point is the cantilevered staircase alongside a wall of solid black walnut,” says Neely of the new-as-old addition. “We came up with phenomenal shapes of wood to work into a random cadence.”

“We wanted to let the architecture sing by creating a balance with color and texture,” says Morris. On the main level, the kitchen and family room funnel into the living room, where the homeowners’ inherited midcentury pieces are covered in a warm palette of blue, gold and refined freewheeling prints. “It was a matter of mixing original midcentury with current midcentury, which sounds like an oxymoron,” says Morris, who reupholstered older furnishings in new fabrics and added more cushioning.

Simple and functional, elegant sectional sofas proved to be Morris’s secret weapon, as well as a seating solution for a family who loves to entertain. Amid curved forms, deep tufting and velvet fabrics, lighting was a key element to the design scheme. “Midcentury tends to be lower than most furniture, so I added height throughout with larger lamps,” says the designer, known for her penchant for robust light fixtures.

On the second floor, the color story changes, gaining momentum with unexpected wallpaper and the perfect pop of vivid saturation. “There are brick walls and a foyer wall with fabulous paneling, but there’s not much texture in the new part of the house, so we created it with wallpaper,” says Morris. The kids’ bedrooms and playroom offer updated iterations of psychedelic patterns, from botanical to geometric, in a cheerful mix of blues, greens and yellows.

The exception to this dynamic rhythm is the master bedroom, a testament to Morris’s ability to make layered prints and styles read airy and sophisticated. “We did print-on-print for the custom headboard and window treatments, but it’s still calming because of the color palette,” she says. “We tried to make it a subdued retreat for a couple with three kids.”

If the mood calls for it, the Wilsons have been known to host a Mad Men-style soirée, and their environs certainly lend to it. However, most days in their inspiring new home are about creating: Leslie working in her basement art studio and the kids crafting upstairs. It’s a spirit that’s true to the house’s old soul. “We hope to be here for a while,” says Leslie. “It just feels right.”