Barbara Westbrook relied on antiques and overscale pieces to complement the original hand-painted linen wallcovering in a circa-1926 abode. Photo by Erica George Dines Tammy Connor expanded a common Chippendale motif and painted it onto grasscloth. Photo by Mali Azima 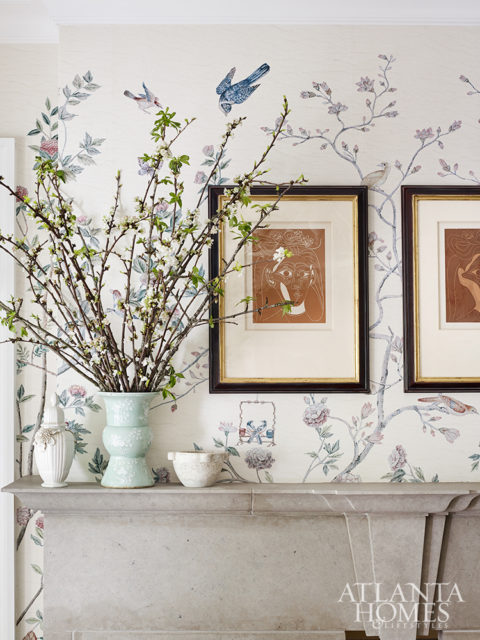 A digitally printed Schumacher paper with a graceful Chinoiserie motif enlivens a room by Beth Webb. Photo by Emily Followill. 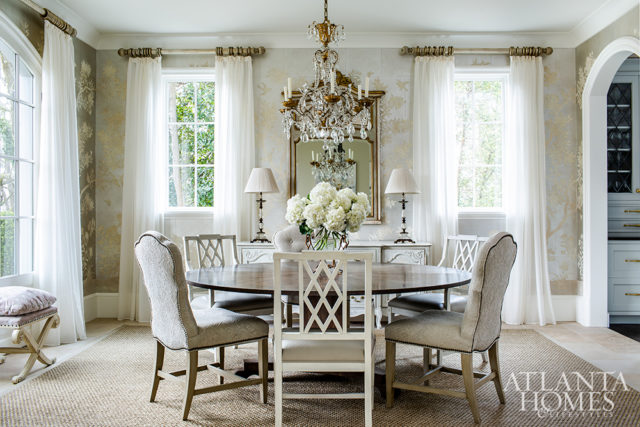 Suzanne Kasler selected a de Gournay paper for a powder room that highlights colors used in nearby spaces. Photo by Erica George Dines A boldly colored Fromental wallcovering amplifies the energy level in an office by Parker Kennedy. Photo by Erica George Dines While spring may be in full bloom, many of Atlanta’s most beautiful rooms owe their year-round garden feel to fanciful, artful wallcoverings.

The extraordinary papers first made their way to Europe in the late 18th century through newly established sea trade routes between Asia and the West, which made it possible for large-scale goods, like the painted panels, to be more easily exported on ships. While ancient Chinese drawings were the first inspiration for the wallcoverings, the designs soon expanded to landscapes, gardens, architectural elements and an array of insects, flora and fauna, which remain in demand today.

Whether to imitate a cultivated travel persona or simply to bring garden folly and charm indoors, Europeans, and early Americans, were so enamored with the colorful, imaginative papers imported from Asia that they established companies to produce the wallcoverings. The designs differed, but the old Asian techniques remained authentic.

Founded in 1797, French company Zuber et Cie still creates their detailed panoramic landscapes with hand-carved woodblocks inked and applied in a series to paper. “An extensive library of woodblock patterns was carved through 1830. And, today those blocks are regarded as French historical monuments,” says Diane Mance, vice president of Travis & Company.

Over in the United States, Charles Gracie began importing Chinese lamps and furniture and quickly gathered a strong following with the chinoiserie-loving grande dames of American design Elsie de Wolfe, Dorothy Draper and Frances Elkins. “My grandfather started a relationship with a painting studio in China in 1927 and we moved to a family-run studio outside of Beijing in 1960 where we have remained for 60 years,” says Mike Gracie, the fourth-generation president of Gracie Studio.

Wallpaper house de Gournay began in Britain in 1986. Its first presence in America was at Atlanta’s showroom Ainsworth-Noah. “Today 80 percent of de Gournay orders are custom-created designs, still produced in the 18th-century manner in terms of artisanship and materials,” says Ainsworth-Noah president and owner Dennis Hunt.

Most recently, another British company called Fromental has hit the scene blending high fashion with interiors. Vivid panoramic scenes and nuanced contemporary patterns can be found in this line that produces both hand-painted papers as well as hand-embroidered silk papers. “We use a variety of materials to create our wallcoverings, including tea paper, hand-gilded paper and woven silks and velvets,” says Victoria Murray, global head of marketing.

For as many advanced technology systems that we install in homes today, it’s inspiring that these artisan-crafted wallcoverings still remain highly prized elements. From the subtle colors to the singular details, artists practicing centuries-old crafts continue to make our homes more elegant and more interesting.