With a level of trust between partners commensurate with marriage, Atlanta-based residential designers Frederick Spitzmiller and Robert Norris are shaping the future of our landscape with a nod to the past. And, like renowned classicist Philip Trammell Shutze, their award-winning designs are leaving an indelible mark on Atlanta and becoming part of the city's soul.

Preserving an Architectural Tradition
Although Atlanta has a longstanding reputation for bulldozing the old in favor of the new, Spitzmiller & Norris is among a precious few ﬁrms dedicated to preserving the city’s classical architectural legacy.

In the course of its quarter-century career, the ﬁrm’s excellence in rehabilitation and restoration has garnered three awards from the Georgia Trust for Historic Preservation and as many Philip Trammell Shutze awards from the Southeast Chapter of the Institute of Classical Architecture & Classical America.

Perhaps the most historically signiﬁcant—and emotional—renovation the pair undertook was the circa 1936 Nunnally-Arnold Residence, where Clark Gable and wife Carole Lombard famously visited during a premiere of Gone with the Wind. Following a run as an Atlanta Symphony Orchestra’s Decorators’ Showhouse in 1999, Spitzmiller & Norris were hired on to restore the Adam-style manor to its original grandeur.

Just one year into the project, a ﬁre burned the home to a crisp. While this could have spelled disaster for another architect, this ﬁrm’s dedication to their clients—and pride of profession—were its saving graces. Thanks to the pair’s borderline obsessive attention to details, the home’s original decorative       elements had all been photographed, documented and catalogued and were therefore ripe for replication following the ﬁre. Just one year later, the Blackland Road beauty rose from the ashes to recapture its dignity.

It’s also telling that Spitzmiller’s personal residence, Redland—a Greek Revival home in his native Columbus, Georgia, which was originally constructed in 1852—required a similar labor of love. Situated on a property slotted for commercial development, the raised antebellum home was given a new lease on life thanks to Spitzmiller’s offer to relocate the home, section by section, to a rural location just 18 miles away. There, the pair rebuilt the home and performed a meticulous restoration, including the addition of a Greek Doric porch in the rear to overlook the gardens and the replication of authentic Greek Revival mantels, installing them where they were missing.

Tradition is the Wisdom of Experience
“It’s funny how, sometimes, it just starts coming out of your pores,” Spitzmiller says as he looks back with nostalgia on his childhood spent in Columbus. “I can remember from the earliest age drawing on every surface I could reach—newspapers, books, walls—and also building tree houses, forts and furniture, and bossing everyone around and telling them how they should treat, use and appreciate those things.”

But the most fortunate inﬂuence, he says, was growing up in a town where “there were no manufactured houses or manufactured things, there were still independent businesses, and all that meant that everything was still on a human scale.”

Norris, meanwhile, recalls drawing plans as early as age 6. When he played with Matchbox cars as a young boy, he would take the time to build “really cool model houses to go along with the cars.” Also proving instrumental was the fact that, in each of the two places his family relocated (from Ohio to Moorestown, New Jersey, and then Atlanta), his family built the ﬁrst house on the block, aΩording him a ringside seat to the building and construction of houses, a process that fascinated him to no end.

That both men found their design sensibilities asserting themselves from the get-go is remarkable enough, but it was translating those talents to the domestic environment that, ironically, proved to be the path less-traveled by their contemporaries in architecture school, many of whom, says Spitzmiller, were “totally unconcerned with the module of man.”

Spitzmiller’s penchant for residential design took him to the University of Virginia School of Architecture and subsequently the Historic Savannah Foundation; Norris’ devotion to the details landed him at the Southern Institute of Technology and on to Marchman Sons, a distinguished Atlanta developer, where he served as a design draftsman. It was here that Norris ﬁrst met Spitzmiller.

Buckhead Manors
In the early ’80s, Atlanta was experiencing an unprecedented wave of speculative building in the residential arena, thanks to Fortune 500 executives moving to the city in droves. “There was this keen interest in building one’s own house and everyone was looking for plans,” Spitzmiller says, recalling the period as a “circus atmosphere.”

The pair left Marchman Sons to form Spitzmiller & Norris in 1985, and it wasn’t long before builders began knocking at their door looking for proper plans. Their eye for scale and proportion soon caught the attention of Southern Living magazine, which published nearly 25 of the ﬁrm’s plans in their famous Southern Living House Plans. To date, the ﬁrm estimates that more than 1,250 of their stock plans have been sold.

The recognition also bred an acute sense of self-awareness. “We started to realize we have this role as arbiter of taste for the public’s insatiable interest in art and architecture,” Spitzmiller says.

In 1992, a Spitzmiller & Norris home built on Lake Burton landed on the cover of Southern Living after winning the magazine’s coveted Home of the Year award. Four years later, the pair scored their ﬁrst Southern Living Idea House, a showcase that coincided with the Summer Olympics in Atlanta. The traditional brick country home, with cedar shakes and shingles—a style Norris says the ﬁrm came to be known for—went on to become one of the magazine’s best selling plans, so much so that just two years later they were asked to design another Idea House in Charlotte. The result was a French country house called Avalon.

In 2006, at the height of the real estate boom, a Spitzmiller & Norris-renovated penthouse at 2500 Peachtree Road was listed for a cool $13 million, the most expensive Atlanta’s luxury condo market had ever seen. With features that included marble from Israel and handcrafted wood moldings, paneling and trim that would make Shutze himself break out in a grin, the character-rich penthouse was indicative of the duo’s minute attention to detail.

Solid Foundation
As in marriage, celebrating 25 years together is a crowning achievement, one that speaks volumes more than any project or award ever could. While Norris cites their willingness to listen to and learn from their clients as key to their success, the same could also be said of the pair’s partnership.

Their secret formula: “You have this outstanding opportunity to best yourself and you can really take it further and polish it more brightly than you ever could have otherwise,” Spitzmiller says.

Nowhere is their dedication to each other more evident than the commitment they make to their clients, many of whom return to the ﬁrm for vacation homes and refer their now-grown children so that they, too, can work with the prestigious team to design their own dream homes.

But it’s the 15-plus year association they’ve built with Blackberry Farm owners Sandy and Kreiss Beall that truly speaks to the pair’s ability to intertwine their clients’ needs with beautiful surroundings, not only exuding graceful permanence but also creating veritable extensions of their lifestyles.

Shaping the Future with a Nod to the Past
Though these residential designers are known for their passion for preserving the integrity of period homes while bringing them up to today’s standards, their expertise lies in designing custom homes in contemporary settings that are bound by a respect for tradition.

Whether the ﬁrm is designing a mountain retreat at Big Bear Pen in Highlands, a Mediterranean villa in Birmingham or a Tidewater cottage in Buckhead, the ﬁnal product always feels right at home in its surroundings. There’s a celebration of historic precedent, thanks to the pair’s insistence on working with only the ﬁnest builders, artisans and craftsmen, and there’s an innate sense of belonging, because the ﬁrm’s thoughtful designs pay close attention to the context of the site.

What inspires both men to keep besting themselves is pinpointing just the right set of solutions for each client, customizing homes that are not only rich with personal meaning but also singularly identiﬁable from the inside out.

One point of pride, according to Norris: “Our houses look as good from the back as they do from the front.” (“Or sometimes better,” Spitzmiller interjects.) Of course, what’s most gratifying is that Spitzmiller & Norris clients tend to stay put. “It’s given us unparalleled satisfaction to know that more of our houses have been retained, valued and enjoyed by their original owners,” Spitzmiller says. “It’s a heartwarming feeling,” Norris agrees. “It feeds your soul.” 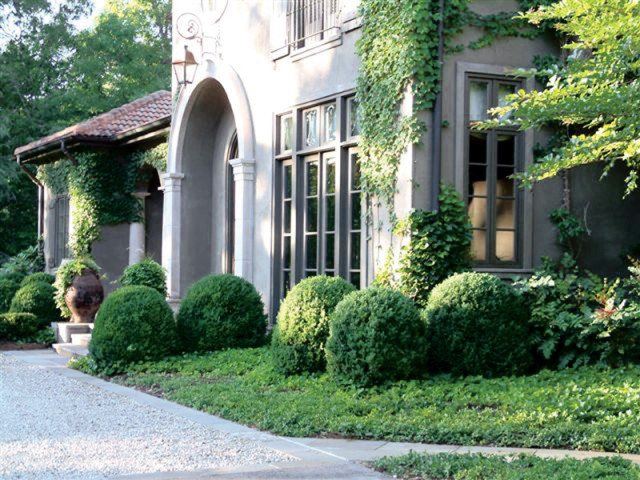 “We’ve had an absolutely magical relationship with Spitzmiller and Norris. Rick and Bob not only listen well but have always been able to work us in when we had a need, and that always meant so much to us. the first thing we started working on together was the Boat House on Walland Pond and there’s something very infatuous with that project; it has been published in magazine after magazine, and it’s something that everyone loves. Building a house for us on Blackberry Farm means it also has to be totally operational. It can’t just look good; it all has to work very well. that’s the most important thing in any architectural relationship—their ability to translate operational needs into a beautiful design.”
–Kreis Beall, creator and co-owner of Blackberry Farm. Kreis and husband Sandy have collaborated on more than seven residential projects with Spitzmiller & Norris “I’ve been fortunate enough to have worked with Spitzmiller & Norris on dozens of properties. Attention to detail is pretty much their calling card and they are always fresh in their approach to design and true to their architecture. They know stylistically what they want to accomplish, and it enables our projects to have the authenticity that our clients are looking for, which makes everybody happy.
–E. Graham Pittman, E. Graham Pittman & Associates. Pittman’s landscape architecture firm has collaborated with Spitzmiller & Norris on dozens of projects over the last 10 years