Not willing to settle for the typical mountain home, Mimi Williams creates a restful retreat that reflects her one-of-a-kind global style In the living room, a mannequin made of straw, branches and feathers seems to stand sentry over the space. The free-flowing form softly contrasts the more geometrical lines of the built-in storage made of reclaimed barn boards as well as the circular shapes displayed within. The circle theme runs throughout the house, starting at the foyer where Hungarian bread boards are graphically displayed on the wall. Leaving no detail of this house unattended, Williams hand picked every element from the sculptural beams and pale Swedish stained floors to lavender storage containers-turned-lamps and eye-catching artworks. The painting over the fireplace is underscored by a mantel crafted from a fragment of a ship. When Williams wasn’t able to find the precise barstools she was looking for, she created them herself, elevating English pub chairs to barstool height and then adding linen skirts. Over the eating area, a trio of copper pendants retrieved from the Philadelphia Civic Center illuminates the space, suspended by nothing more than pieces of heavy rope. The designer’s singular point of view is, in fact, evident throughout the house, right down to the powder room mirror made of wine barrel staves and the sculptural Don Quixote greeting visitors at the front door. Not one to settle for conventional headboards, Williams had one crafted for the master bedroom out of old French pilasters, another for a guest room out of antique Chinese doors. Soft furnishings in both sleeping spots are intentionally understated, allowing collectibles, such as an array of cogs, shoe forms and antique carts to be fully appreciated. 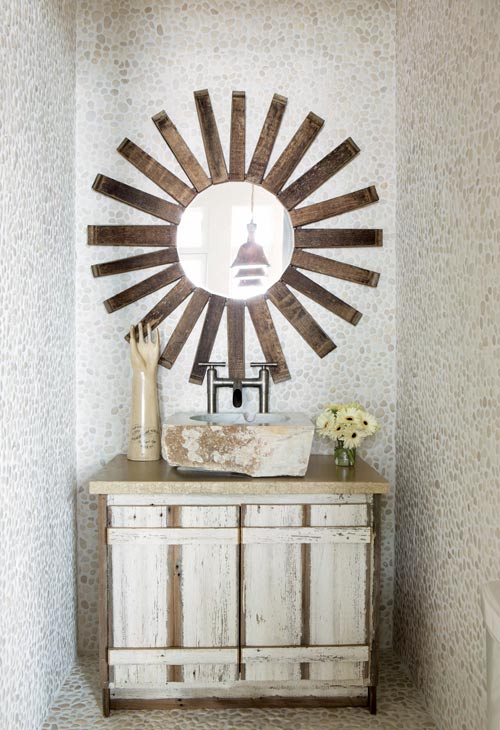 With designer Mimi Williams, you expect the unexpected. But she’s taken that concept to an entirely new level in her recently completed Highlands, North Carolina, retreat.
“I wanted something very different from my home in Atlanta, and the design had to speak to both the style of the house and its location in the mountains,” she explains. “I aimed for a global and organic point of view—something that transcends time and inspires me.”

Amassing the global items was easy; Williams simply pulled from a treasure trove of objects collected during one of her many trips to Europe and Asia. In the foyer, Hungarian bread boards are hung on the wall in graphic fashion. In the living room, an Indonesian temple fragment is mounted as sculpture. In a bedroom, Chinese doors create a one-of-a-kind headboard, accented with an African ceremonial headdress. Even the diminutive powder room takes on international flair with its Italian marble sink and a mirror made from the staves of French wine barrels.

“When they co-mingle, objects from different cultures add great character and visual interest to a home,” says the designer. “Here, French, English, Asian and African pieces mix effortlessly—along with splashes of Ikea and West Elm, plus a few of my own warehouse stashes.”

Still, it’s the wealth of circular shapes throughout the house that best reflects this designer’s personal point of view—readily apparent in basketry, old wagon wheels as well as Chinese bi discs made of jade. “My fascination with circles came early in life,” Williams explains, “when I had a winning science project that focused on optical illusions; I compared circles of the same color against black and white backgrounds. It wasn’t until my adult years that the meaning and symbolism of circles came to me—‘full circle,’ so to speak.”

It’s interesting to note, as well, that Williams’ science project all those years ago was carried out in black and white. To this day, strong neutrals are her signature hues, often accented with shades of red. In this residence, however, she’s taken a softer approach, relying heavily on natural linen, the grayed-browns of reclaimed barn boards and warm coppers like those found on the kitchen’s pendant lights.

In each room, however, the backdrop is the same. “All of the rooms are painted in Pratt & Lambert’s Seed Pearl,” she points out. “It’s a very tranquil white that allows the stronger, more sculptural objects to stand out.”

That sense of tranquility goes far beyond the paint color, however. Throughout the house, there’s a feeling of serenity—making it exactly what every retreat should be. Williams’ reaction each time she enters her mountain home is perhaps the best measure of her design success. “My blood pressure,” she says, “drops 10 points the minute I hit the front door.”