A visionary shop owner transforms her Tudor-style home into a chic and winsome dwelling, awash in white plaster walls and one-of-a-kind treasures. As the owner of South of Market, Kay Douglass has a good excuse to indulge in her favorite pastime: traveling abroad and scouring for distinctive items, some of which never get beyond her own home. In Belgium, Douglass found a strap from an old farm tool with wires threaded across it, and took it home for her living room wall. Douglass was immediately attracted to what she refers to as this Tudor’s crunchy exterior. Part of its beauty is that its not perfect,” she says. Someone painted it in the past and didn’t want to clean up. To her, it’s all part of the charm. Cabinetmaker Mike Hammersmith crafted all the kitchen cabinets as well as an island-like table, where the Douglass family tends to congregate. The iron doors just beyond, designed by Yong Pak, lead to the loggia. Douglass discovered this picnic table and benches while she was sitting in them during a buying trip in France. A gray wool headboard had to be completed in the master bedroom, because the finished product wouldn’t make it upstairs. The glass lamp set atop a custom metal cabinet has made it through three of Douglass’ moves, a badge of honor for any piece. Lamp, Ainsworth-Noah. The master bath, like much of the house, is awash with natural light and timeless appeal. Although some square footage was forfeited to make room for the master closet, there“s still plenty of space for all the essentials“and then some. Floor tiles, Waterworks. Cheerful shapes and touches of tangerine add individuality to Douglass“ son“s room, without being cutesy or cliche. 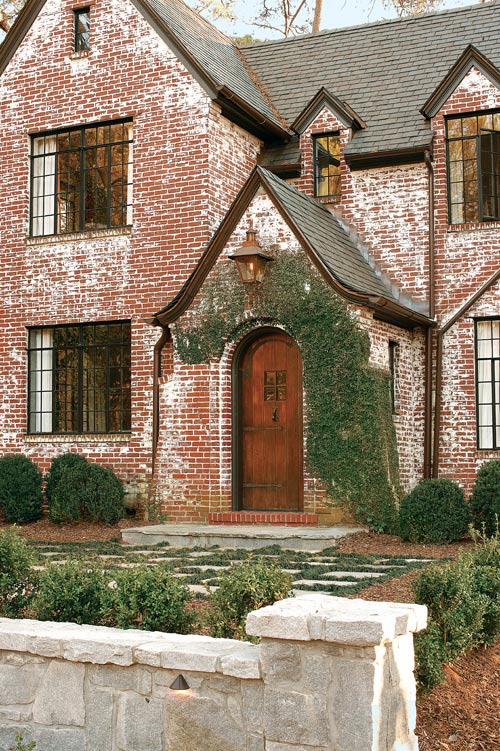 Kay Douglass envisions her family in their Peachtree Heights home for the foreseeable future, and—considering they’ve bought and renovated five homes in the past nine years—that is noteworthy. The charming brick house caught the designer’s eye several years ago, when she was driving around looking at homes, one of her favorite pastimes. “I put a note in the mailbox asking the owners to call me if they were interested in selling,” Douglass explains.

When she didn’t get a response, Douglass thought she was out of luck—until a serendipitous moment when her Realtor mentioned a house that she might want to look at. When Douglass realized it was the same house she’d coveted years earlier, she couldn’t get inside soon enough. An offer was put on the house the next day.

When it came time to tackle the interior, the brown walls were deemed too “Hansel and Gretel-y” but the Douglasses loved the plaster look. So, after an electrical overhaul, they had the walls re-plastered and painted white. Throughout most of the 3,500-square-foot home, a simple palette of yellows, grays and whites creates cohesion among the rooms. “The house is relatively small,” says the designer, “so you can see into most of the rooms from any room.”

The exception to the all-white-walls rule is in the dining room. “I had an epiphany one night,” says Douglass. “I thought, there, the white might be too white.” So she asked her builder to cover the walls in the same gray mortar that he’d used on the outdoor fireplace, giving the dining room the feeling of an outdoor space.

Even guests who might not know that Douglass is the owner of South of Market (three locations, two in Atlanta and one in Charleston) might well suspect she has a connection to the rustic, yet elegant home furnishings store, given that this home has the same aesthetic. The business gives Douglass an excuse to indulge her love of treasure hunting, though, admittedly, some of the unusual antiques and miscellaneous treasures never make it to the shop. Specifically, the re-purposed object is a South of Market trademark and its genesis is clear from the owner’s home. In son Jack’s room, mounted and framed farm implements hang above the bed while a lamp’s rustic wood base and orange shade offer an unexpected combination of old and new.

In the living room, Douglass drew inspiration from the elegance of a hotel lobby. Two long, white sofas face each other, meeting the designer’s standard of “comfy, but not squishy,” and yellow accent pillows add a fresh pop of color. On one side of the fireplace, an arched wooden cabinet door conceals a TV and DVD player while, on the other, its twin leads to the adjacent office. And above it all, a chandelier made of driftwood lends yet another touch of rustic-yet-sophisticated style.

There is something about the house that has an ethereal quality. Maybe it’s the calming view of the Peachtree Heights duck pond or the soft sunlight that spills into the house. For her part, Douglass leans toward the latter. “The light…feels like magic,” she says. “It’s our peaceful, happy house.”