In the master bedroom, a curtained wall adds softness.Webb dressed up the existing bed with bedding from Peacock Alley and custom pillows. Nick enjoys making furniture in his spare time and put his talents to use in the breakfast room. Here, he made the mahogany table and leather nailhead console. Antique rustic bread paddles add a sense of storied charm. In the foyer, Webb layered a plaster model of the Fort Moore Pioneer Monument with a marble figure. Ottomans covered in a Celerie Kemble for Schumacher fabric rest below a cut-out console. Webb came across the striking watercolor ostrich painting by Heather Lancaster via Spalding Nix Fine Art’s Instagram account. Its soft coloring was a perfect match for the room’s plaster and terra-cotta sculptures that are displayed on the new niche shelves. The sofas and pillows are from Bungalow Classic. A Barbara Barry for Baker étagère in the master bath highlights plaster maquettes and framed medals. The guest bedroom was given a lighter and brighter design scheme. Plush chairs and an ottoman from Bungalow Classic complement the custom headboard. Custom slipcovered chairs and an expanding dining table from Bungalow Classic lend themselves to gatherings during holidays or special occasions. Elegant as any interior space, the porch is a study in natural materials and organic hues, creating a soft and serene scheme. A long, weathered teak table from Janus et Cie anchors the room. It is surrounded by comfortable woven armchairs by Kingsley-Bate. A teak dining bench, also by Janus et Cie, provides plenty of seating for friends and family. The rug is by Dash & Albert. The wicker demijohn is from A. Tyner Antiques. 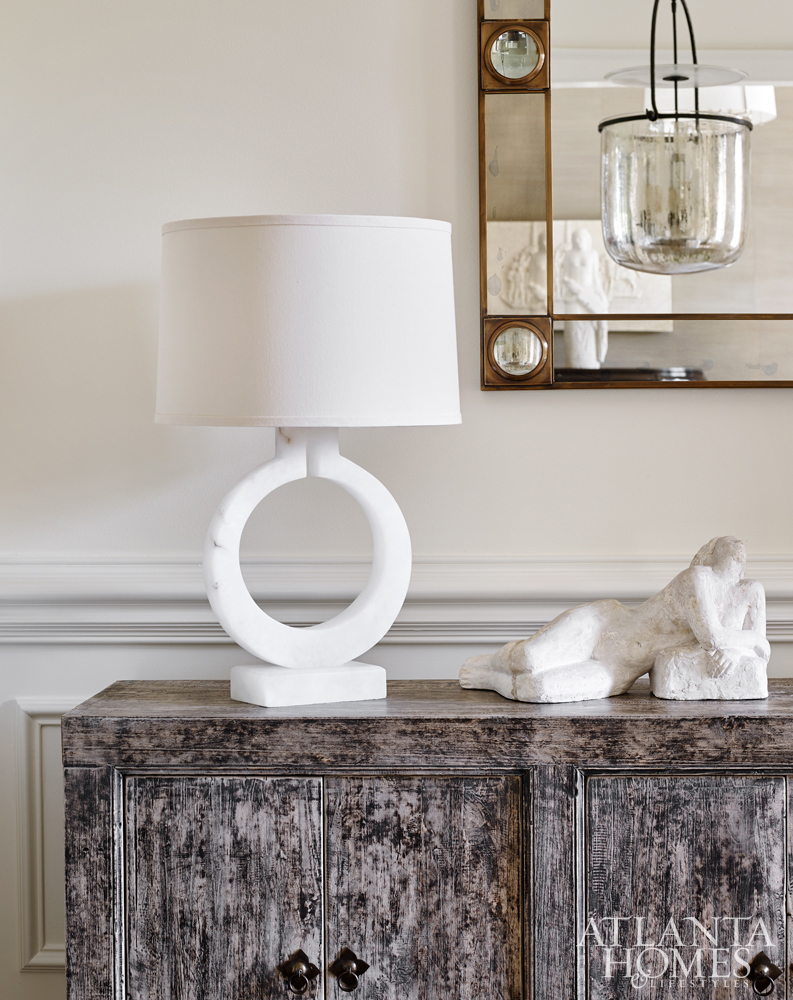 Interior designer Beth Webb approaches each project with a steadfast rule: The home must reflect the personality of its owners. So when she spotted Lisa and Nick McKay’s impressive art collection during a visit to their home, Webb decided to make it the centerpiece of the home’s renovation—and for good reason. “The art is not only really stunning but it’s an intensely personal collection,” says Webb.

All of varying sizes and mediums, the sculptures, maquettes and medals are by Lisa’s late grandfather, Henry Kreis, an accomplished German-born sculptor who immigrated to the United States in 1922. After studying at the Beaux-Arts Institute of Design in New York City, Kreis apprenticed with Paul Manship, a highly influential American sculptor. As an assistant to Manship, Kreis worked on Rockefeller Center’s world-famous Prometheus sculpture. He went on to have a highly regarded career himself, earning accolades and commissions across the country.

“I have loved and coveted all his sculptures and other works since I was a child,” says Lisa. “My father recently passed on a very large portion of his collection to me at once, and I was at a loss on how to showcase them because I wanted each piece to be appreciated.”

To make the artwork a focal point Webb added pedestals, shelving and other displays throughout the home to give the sculptures—once tucked into corners, relegated to the floor or even in storage—prominent viewing. And although there are countless works on display, including beautiful silk-screen prints by Lisa’s late grandmother, Patricia Alden Kreis, it never feels overwhelming, thanks to Webb’s thoughtful planning, no doubt influenced by her background in art history.

Also top of mind for Webb was to scale and soften the home’s interiors. In the living room, the fireplace was given a complete overhaul, as the designer deemed its petite proportions too small for the space. Also under scale was the contemporary leather furniture that exuded an uninviting ambience. “[The McKays] weren’t using this room much because it felt very uncomfortable,” says Webb. She gave the room new life by commissioning a handsome stone fireplace and layering in plush textures. Bedrooms also received a makeover, including the master bedroom that was retrofitted with a curtained wall. “Just like the rest of the home, this space needed to be more approachable. We accomplished that by adding layers of soft textures,” Webb says. “There’s a lot of consideration that goes into the parts and pieces when decorating.”

Webb’s attention to detail is a trait familiar to Lisa. “My grandfather’s forms are very simple yet very strong,” says Lisa. “They have a natural and soothing simplicity to them. He never wanted to create a piece that had anything unnecessary in it. It’s a philosophy that’s echoed in her home’s interiors—peaceful and pared down, yet full of panache.”

Wishing you a happy and safe Thanksgiving from all