Vaulted ceilings and mahogany details, such as the framed fireplace and windowed doors, define the robust living room that’s filled with elegant yet approachable trimmings. An antique tapestry the homeowners discovered in Paris anchors the room, where Dessin Fournir wingback chairs and Dennis & Leen armchairs welcome visitors to sit and admire the sweeping views. Arched doorways are a common thread sewn throughout the English-inspired home. In the formal entryway, an antique credenza from William Word Fine Antiques and a gold mirror from Provenance Antiques set the stage for the vast yet highly personalized interiors. This dramatic staircase, with its handsome mahogany banister and soaring windows, lead to the five bedrooms, all located upstairs. The steps are outfitted with neutral carpet to warm up the space and soften the clatter of tiny feet and paws. Measuring at a sizable 14,000 square feet, this palatial Kennesaw home, which favors the style of an English countryside estate, has five bedrooms and seven baths. Harrison Design teamed up with Laurie Lehrich of Design Galleria Kitchen and Bath Studio to create the hardest-working room of the house: the kitchen. The eat-in kitchen serves up tasteful and smart style; it also mixes creative solutions, such as beautiful walnut cabinetry that also hides appliances, with showstopping touches, like the stove’s eye-catching mosaic backsplash of custom marble and limestone from Renaissance Tile & Bath. As frequent entertainers, the homeowners sought a dining area that was beautiful and durable. The table and chairs, both crafted by Dennis & Leen, embody an understated elegance that is fit for formal dinners as well as casual family lunches. The seating is covered in easy-to-clean Cortina leather and backed with a patterned Fortuny fabric. Located upstairs, the master study, lined with walnut paneling, is outfitted with a pair of Sherrill Furniture side chairs, as well as two benches from English Accent Antiques that were reupholstered in Crest Leather, perfect perches for a competitive game of chess. A canopy bed by Madeline Stuart holds court in the master suite. To prevent the expansive space from feeling cold, Ferguson covered the walls with linen to add subtle texture. The custom duvet is made with fabric by Mulberry Home, setting the soothing color palette for the light-drenched room. This pretty-in-pink bedroom, painted Sonoma Clay by Benjamin Moore, is outfitted for the homeowners’ young daughter with a Hickory Chair bed, complementary blue rug by Keivan Woven Arts and dainty chandelier from Circa Lighting. 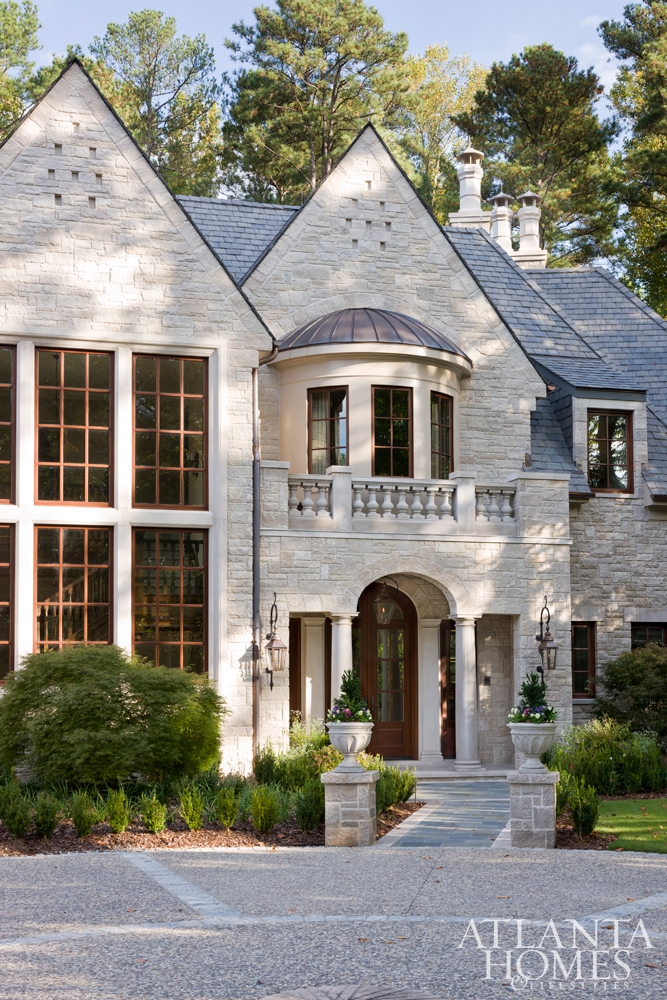 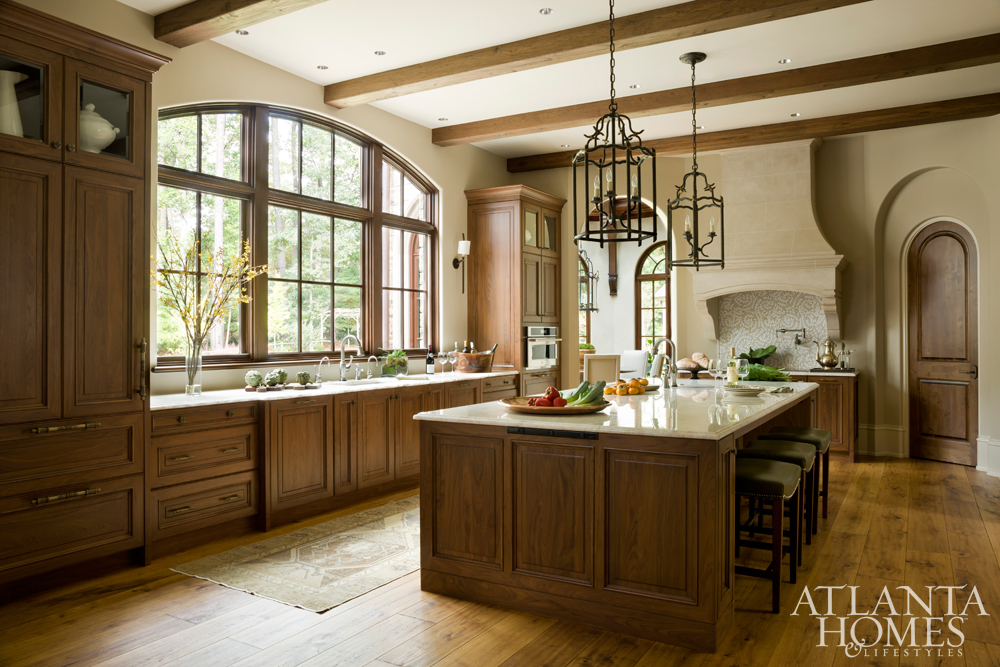 When designing their forever home, a nature-loving family of four looked to their Kennesaw property’s backyard for inspiration. But unlike most lawns, their estate straddles a national park that boasts beautiful fauna, expansive green space and grazing wildlife. What it sowed in inspiration was then reaped by the creative team at Harrison Design.

Architects William “Bill” Harrison, Rick Hatch and Robbie Pich, along with interior designer Karen Ferguson, began designing the homeowners’ dream domicile in the north Atlanta hamlet in 2009. From the beginning, the family-focused homeowners wanted the sizable space to feel comfortable and inviting—not unapproachable or overly formal—with an equal emphasis on interior and exterior lines of sight.

“Our main goal was to focus on all the magnificent views we could capture,” says Ferguson. “We did this by incorporating large windows throughout the home, some stained dark to draw the eye outside.”

Despite its expansive size—a substantial 14,000 square feet, the construction of which was spearheaded by Rick Fierer of Bildon Construction—Ferguson executed a relaxing and comfortable interior that reflected the family’s lifestyle. Everything from fabrics to furniture was chosen with consideration for design and durability, needing to accommodate everything from dogs and children playing with abandon to entertaining family and friends.

Many of the textiles throughout the home, which skews toward a natural color palette so as not to compete with its woodsy views, are outdoor fabrics that won’t fade from the constant streams of natural night and will resist accidents by pets, kids and overzealous party guests. Ferguson notes that comfort and style went hand in hand as the family selected furnishings for the five-bedroom, four-bathroom home. “They wanted to sit in every chair and sofa before they chose it,” she says. “Comfort was first and foremost a priority.”

The warm and welcoming interior furnishings complement the showstopping architectural details throughout the home. Mahogany-trimmed arched windows are a mainstay throughout the palatial property, some equipped with beveled glass windows to catch and bounce light throughout the space.

The home’s elegant yet breezy design favors an English estate, as seen in the main floor’s conservatory, located between the dining room and kitchen as a breakfast room of sorts. There is no denying that the dramatic space has some of the best views in the home. The homeowners, who are admirers of the Biltmore and its acclaimed architect Richard Morris Hunt, were inspired by the estate’s arched conservatory, so Harrison and the team designed the conservatory with mahogany arches and Venetian plaster–covered walls.

Throughout the rest of the home, where some of the ceilings soar as high as 22 feet, Ferguson found creative ways to prevent the rooms from feeling too austere or cold, from sprinkling in the homeowners’ tapestry collections to wrapping bedrooms with linen wallcoverings. But, says Ferguson, it’s the homeowners who inevitably fill the home with warmth.

“The house has an old soul, even though it’s new,” says the designer. “From the antiques to the views, it tells their story.”