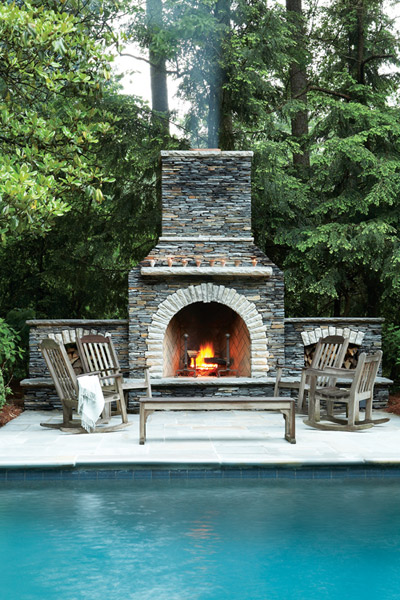 Existing plants, such as this fern, were kept to complement new garden elements, which included the addition of a fountain. Some of Smith’s latest additions to the garden include a bed of foxglove, delphiniums, columbine and roses. A climbing hydrangea with white lace cap flowers is a self-adhesive vine growing beneath the new window box. Several Italian Impruneta terra-cotta pots throughout the garden are filled with seasonal annuals. 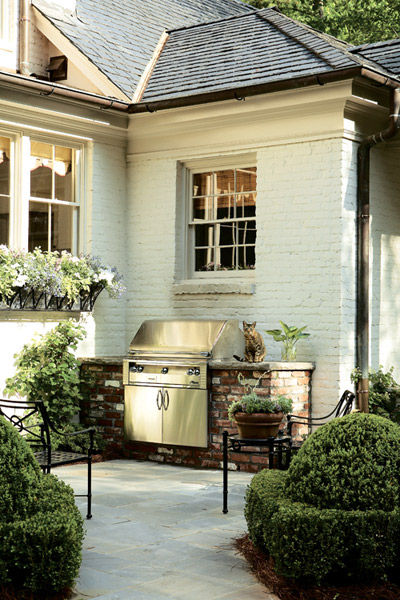 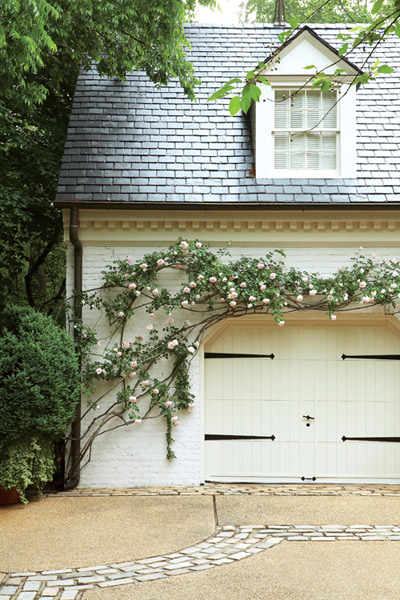 The New Dawn rose vine climbing up the garage was part of the garden’s existing flower base.

Garden designer Alex Smith believes planning a garden can begin only after he gets to know his client’s lifestyle. “Learning how they intend to use the space is just as important as choosing the right plantings,” says Smith, owner of Alex Smith Garden Design Ltd.

And that’s exactly how he began the plan for a backyard garden in Buckhead. The homeowners approached him to analyze the outdoor space just as they were beginning a kitchen remodel. “They really wanted the new kitchen to have a better view of the garden, but they also wanted to create a space to enhance their outdoor experience.”

Taking those needs into consideration, Smith came up with a plan that focused significantly on a new pool terrace, fireplace and fountain. The garden already had several layers of existing plants and hardwoods, including mature rhododendrons, white oaks, magnolias and a Japanese maple, which he also incorporated into the design.

To create the outdoor living area that the clients desired, the original limestone pool terrace was removed and replaced with gray crabapple orchard stone. A dramatic stacked Cherokee stone fireplace was built, and a grill porch was added along the side of the house.

Smith chose to add a classic limestone fountain at one end of the pool to create a strong center point for the design. Behind it he planted a ‘Hearts of Gold’ redbud tree with lime green foliage and blue mophead hydrangea. “All of these together with the deep blue pool creates a striking backdrop for the fountain—and the beautiful view from the kitchen they wanted,” Smith says.

But it wasn’t just the view that was improved in Smith’s plan. Poorly designed masonry details and pathways were removed and reorganized. American and Korean boxwood hedges frame the new walkway, and a bed of white foxglove, mixed pastel delphiniums, white columbine and light pink ‘Knock Out Roses’ add an additional layer of texture and hints of soft color.

A large-scale, custom window box beneath the kitchen window was added to give the garden a strong architectural element. Trailing lobelia, Swedish ivy, ivy geraniums, ‘Diamond Frost’ euphorbia and plumbago are interchanged throughout the season for texture and color. But Smith admits he really added the window box to further enhance the view. “When the clients look out of the kitchen window, they see a striking view of the fireplace and fountain, but they also look right over this nice full window box.”

A garden just wouldn’t seem complete without color, though Smith says this design is really more about form and texture. “The garden is very classic with subtle pockets of color. I’m a very big believer in making the house and garden one; I think this garden feels right, but it also feels like it’s always been there.”

Coastal colors abound in a guest bedroom by @will_