Designer Billy Roberts managed to keep the massive living room, with 30-foot ceilings, comfortable and intimate, choosing pieces such as the vintage Ralph Lauren barrel chairs for their scale. A sitting area in the living room overlooks the salt marshes and drooping oaks. In the kitchen, Roberts played off his love of green by mounting an oversized antique clock and oyster plates above a pair of niches outfitted with green-and-white tile backsplashes. Two pairs of slipcovered bar stools flank the diamond-green granite countertops. Contributing a sense of drama to the entry way is the nautilus motif Roberts designed for the limestone floor and the wrought-iron railings handcrafted to imitate the marshy blades of grass just outside the windows. Iron work by Andrew Crawford. One of the more formal rooms in the house is the study. Sliding doors, a hidden TV and a fireplace make the room a personal sanctuary. Roberts painted the ceiling Tiffany blue, and finished the walls with delicate layers of aquamarine-blue, for a serene depth. The screened-in porch is open to the elements on three sides, boasting views of the rose garden, pool and guesthouse, and the signature droopy oaks and salty marshes of Sea Island. Seashell sculpture by Chris Condon. Roberts enlisted Edgar-Reeves to hand-bead a pair of chandeliers for the dining room. The table is large enough to seat three generations of the client“s family and makes for a fresh contrast against the whitewashed floors. 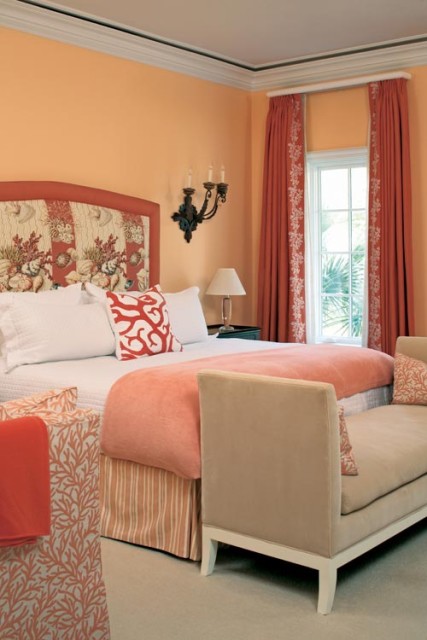 One of the warmest, most enveloping rooms in the house is the marsh-side guest suite; a study in corals, the walls pick up the colors of the sunset in the evenings.

Roberts believes in anchoring bedrooms with antique armoire, which in this case hides a TV. Flanking the armoire are a carved pine mirror and English chest.

In lieu of a pair of bedside tables and lamps, Roberts opted to hang Palm Beach-style pergola lanterns from the ceiling and place a painted 19th-century English bureau between a pair of beds. The banquette-like headboard adds sophistication. The master suite, with a balcony overlooking the marsh below, is removed enough from the action of the house to make it a private sanctuary. Jennifer Orne designed the fireplace with Chesneys of London inlaid with a mosaic tile border. A closer view of the mosaic tile fireplace. Interior designer Billy Roberts. His clients, who discovered local artist Dusty Griffith at his opening show, later commissioned two large works for their home at Sea Island. “Got to go down before you go up,” Dusty Griffith, through Bill Lowe Gallery.

It was only fitting that one of Billy Roberts’s largest commissions to date was for an Atlanta couple’s vacation home on Sea Island. The talented young designer spent the summers of his youth vacationing among the salty marshes, towering oaks and Addison Mizner-influenced architecture of the coastal Georgia oasis. “I was overwhelmed with gratitude to be asked to take on such an amazing project,” says Roberts. “It was also such a blessing because I was able to stay and spend time with my 98-year-old grandmother who lives on the island. My grandmother’s timeless style has always been one of my greatest influences.”

Roberts began his career studying garden design with local legend Ryan Gainey and then apprenticed under Atlanta interior designer Scott Laslie (whom Roberts credits with a “brilliant and sophisticated purity in style”) before making his design foray into Atlanta with Three Inc., a design firm fusing landscape, interior and architectural principles. Although currently operating solo under Billy Roberts Design, former Three Inc. partners Kacee Pyles and Kristan Moore assisted him with this two-year-long project, and his three-pronged holistic approach is evident throughout the interior bones of this 12,000-square-foot home.

It’s the indiscriminate layering of dressmaker details, though, that keep the scale of this old-world beauty from feeling overwhelming. Case in point is the nautilus pattern he designed for the foyer’s limestone floor, which has pride of place alongside the wrought-iron railings handcrafted by Andrew Crawford to look like blades of grass and topped with a white-washed pine banister. Roberts washed most of the walls with Benjamin Moore’s Heron White to reflect the ever-changing glow of the sunset over the marsh and accentuate his client’s extensive art collection. “This house’s inherent extravagance had to be balanced carefully with the client’s need for comfort without formality,” says Roberts.

The designer had worked with the homeowners previously on revamping their Buckhead town home, so they trusted him, he says, to make their beach retreat elegant but comfortable enough for their family, which had grown to include more than a handful of grandchildren. “The homeowner has exquisite taste, a love of color and an effervescent personality,” says Roberts. Accordingly, he infused the interiors with a watercolor palette and pops of his favorite color: green. He also designed slipcovers for the public spaces, specifying more durable outdoor fabrics for the dining areas and anywhere else the grandchildren might be playing.

Working from the outset with Atlanta-based architecture firm Harrison Design Associates allowed him the freedom to customize the interior bones. Roberts combined forces with Jennifer Orne to customize the architecture. “From the study’s custom paneling, bookshelves and all of the cabinetry, Jennifer is a genius in her drawings and refined detail,” Roberts says. He, Orne and the homeowners, for instance, chose to visually raise the living room’s 30-foot ceiling by creating a lattice pattern of white beams against an alcove painted a fresh Kelly green, a motif that is repeated in the kitchen’s ceiling, backsplash and diamond-patterned, whitewashed floors. He was also instrumental in creating the entry hall’s dramatic floating staircase, as well as specifying the addition of a balcony to the master bedroom, a priceless amenity considering the marsh views through the French doors. “I think the builder had it out for me by the end with all of the elaborately detailed work we asked of him, but because of his labored precision the house is truly a work of art in itself.”

The result of that collaboration is a house that’s utterly livable, with the entire first floor devoted to comfortable living and entertaining spaces anchored by two screened-in porches for enjoying the natural light and stunning views. “The sun setting on the marsh and the way it changes colors in the house was very influential in the design,” says Roberts, and likewise, the white walls allow for the natural hues, such as light blues, oranges and greens, to accentuate the home’s location, creating an interior composition as striking as the scenery it intensifies.