This neoclassical French home by Harrison Design radiates a stately presence with materials that include limestone, wrought iron, stucco, sand-cast brick and cobblestone. The builder and general contractor was Brody Dernehl with The Dernehl Company. Early morning mist envelopes the outdoor living area, which includes a quatrefoil-shaped pool and boxwood hedges separating the pool from the surrounding gardens. The Harrison Design team elevated the scale of the entry with two larger tiers topped with limestone ball finials that convey the home’s ornamental and grandiose feel. A commanding wrought iron and painted gold fence by Lipko Iron Works blends with a cast limestone fountain and sand-cast brick in the backyard. An arched opening on the loggia frames the pool, statue and wooded view on a single axis point, which is a hallmark of European design. The boxwood hedge around the pool, which the client requested, enhances the pool complex and the garden. From the materials to the curves in the design, each element was intended to be beautiful on its own. “The Good Fairy,” a handcrafted garden statuary by Florentine Craftsmen. Crepe myrtles cascade over the poolside area, joining an array of hydrangeas. Creekside Nurseries served as the landscape contractor. The chaises and umbrella are from Frontgate. The firepit, set off by a curved wall, serves as a natural destination point for outdoor entertaining. “From the natural world, there are two things that people love. They love water. They love fire,” says Bill Caldwell, director of Harrison Design’s Landscape Architecture Studio. The outdoor area is framed by plantings, including English-style perennial borders set against the stucco and brick exterior. 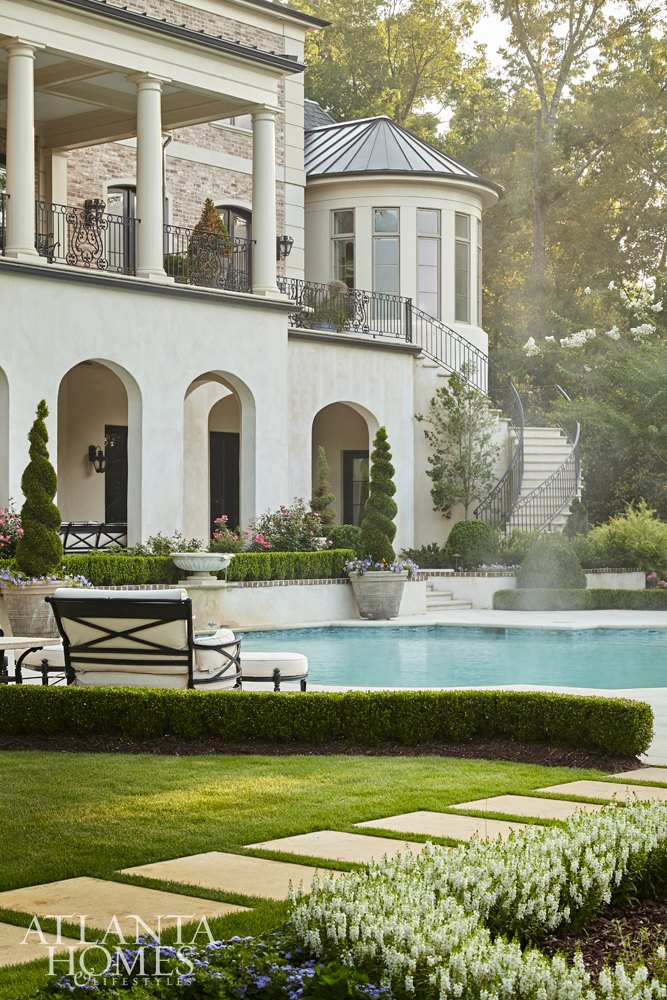 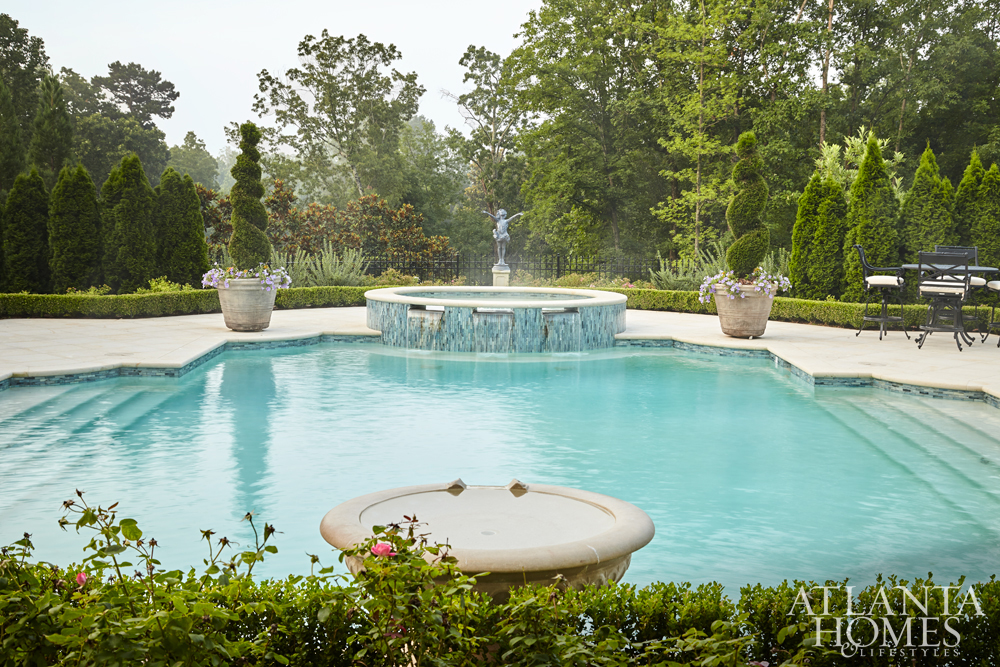 The front entrance of this neoclassical European estate exudes French formality with limestone, a gilt gate and boxwood parterres, while the backyard pays homage to its natural Georgia setting and focus on outdoor living.

Perennials, hydrangeas, crepe myrtles and bushes bearing blackberries and blueberries relax the design for poolside lounging, fireside chats and memorable moments among family and friends. The steep wooded lot required the team at Harrison Design to work in tandem to create surroundings that matched the home’s opulent stature.

“The architecture was inspired by historical French estates, with a stately formality to the front, gated entrance and patterned drive of stone and aggregate,” says archiect William H. Harrison. “The sense of European classicism continues in the back, particularly with the series of arched openings on the loggia, second-floor terrace and quatrefoil-shaped pool.”

Harrison, project manager Robbie Pich and Bill Caldwell, director of Harrison Design’s Landscape Architecture Studio, worked together from the start of the project to conceptualize the landscape elements that reinforced the design. One of the initial challenges was a 15-foot hill that blocked access to the property, which required a vision of a magnitude that Harrison Design is able to conceive, Caldwell says. The European influence lent importance to a strong visual axis as a way to create order and beauty through the two-acre landscape.

The motor court and scalloped detailing reinforced the neoclassical, traditional European aesthetic. Exterior materials, which include stucco, brick, limestone and wrought iron, were driven by the intent of the design. “The way they’re used together are all reflections of the design style of the house,” Caldwell says.

The pool’s quatrefoil design was borne out of a Moorish design influence, which was embraced and integrated into French and European design through the years. A boxwood hedge continued to establish the geometry of the hardscape and architectural background of the garden, and then gave way to an English influence with perennial borders that are relaxed in comparison to traditional French gardens.

Caldwell placed a naturalistic, loose planting composition behind the boxwood parterres, while an herb and edible garden along the periphery features raspberry, blueberry and blackberry patches and various fruit trees.

The design drew from the emptynester homeowners’ travels to Europe as they envisioned a dream house with outdoor living for themselves and family. Shortly after the landscaping was installed, they hosted a poolside wedding for a niece. From the materials to each curve in the design, Caldwell intended for each element to be beautiful on its own. “You think about the sinuous S the grand piano shape makes,” he says, “that’s the level of beauty we’re trying to have in everything that we design.”