Top picks for small-ship cruising in 2020 and beyond A Paul Gauguin ship amid the overwater bungalows and lush tropical slopes in Bora Bora. Sunset sails on a Windstar ship at sea. Vietnam and Cambodia are best experienced via Aqua Expedition’s Aqua Mekong where the staff-to-guest ratio is 1:1. The revolutionary new ship in the SeaDream fleet, the Innovation, will explore all seven continents and the world’s most remote destinations including Svalbard, the Northwest Passage, Antarctica, the fjords of Norway, Japan, New Zealand, the Fiji Islands and the Great Barrier Reef. A rendering of the open-air sea beds on the SeaDream Innovation. 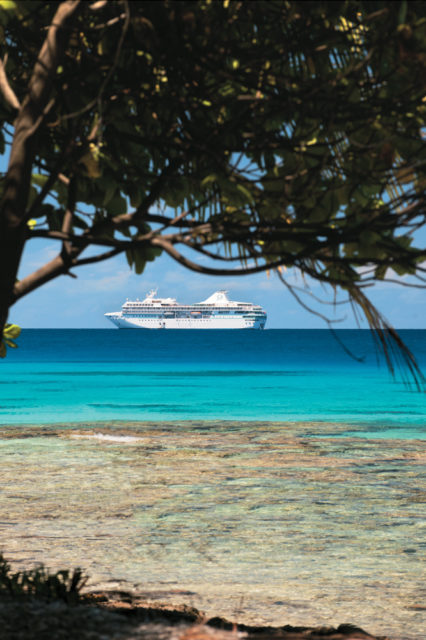 “If a bucket list is what people want to do before they die, a Wanderlist focuses them on how they want to live,” stated Virtuoso CEO Matthew Upchurch at the recent 31st annual Virtuoso Travel Week (VTW) in Las Vegas. “We did some exploration into the notion of peoples’ bucket lists and found most are made up of two things: places they want to go and experiences they want to have.”

Wanderlist, Virtuoso’s new web-based initiative, was all the buzz at VTW 2019. The platform enables travelers to take first steps in curating their own experiences by organizing their personal wish lists and dream destinations into an online travel portfolio. Through this, Virtuoso travel advisors can uncover unknown aspirations of their clients—insight which allows for more effective collaboration on travel plans.

The term also sparked some thought. “What’s on your Wanderlist?” was not only the theme of VTW but the question that connected more than 6,200 conference attendees—at cocktail parties, award shows and one-on-one meetings—representing a total network of 20,000 travel advisors and 1,800 world-class partners. Known for their privileged access and connections to rare experiences, Virtuoso travel advisors can turn anyone into a VIP anywhere in the world simply by making a phone call.

With an 11 percent increase in cruise sales in 2019, scores of Virtuoso cruise partners were on hand to share what’s excitingly new and Wanderlist-worthy at sea right now. Here are the standouts in the small ship category:

Small ships in the Paul Gauguin fleet are made for cruising in Tahiti, French Polynesia, Fiji and the South Pacific, specifically to sail the island lagoons. All the cruises feature Les Gauguines and Les Gauguins—a troupe of local Tahitians who serve as staff, entertainers and storytellers that bring the island lore to life. In 2020, a new 16-night Fiji to Bali voyage has been added to the itinerary, as well as favorites including various 7-, 10-, 11- and 14-night cruises connecting Tahiti, the Society Islands, Tuamotus, Cook Islands and Marquesas, and 12- and 13-night Fiji, Tonga, Cook and Society Islands sailings. pgcruises.com

In addition to those sexy white sails on some of the ships, small-ship market leader Windstar is really best known for doing things differently—and, for its exceptional shore excursion program. Complementing the line’s popular Concierge Collection and Essentials Collection, the award-winning line recently launched Beyond Ordinary Tours, in-depth and over-the-top experiences offered in select ports. Imagine this: a panoramic helicopter flight from Monte Carlo to Alain Ducasse’s La Bastide de Moustiers in Provence for a Michelin-starred lunch. And that’s just one. windstarcruises.com

Adventurous luxury travelers, here’s something new for you—Crystal Yacht Expedition Cruises debuts in August 2020 with its first luxury expedition yacht, Crystal Endeavor, which offers an off-the-beaten-path option to Crystal Cruises ocean and river sailings. From deep cultural connections to exploration of remote and rugged regions, guests can visit iconic natural wonders like the Great Barrier Reef and Mount Fuji, explore Japan’s most sacred temples and shrines, Borneo’s rainforest or the penguins of Antarctica. Zodiac quests, epic aerial excursions and diving among spectacular reefs are suitable activities for the most intrepid travelers, but leisurely hikes should please just about everyone. crystalcruises.com

Aqua Expeditions is known for its in-depth exploration of world culture and nature in a milieu of ultimate luxury. With only 20 suites, the five-star Aqua Mekong is the ultimate way to savor a locally focused culinary experience, while enjoying eye-level views of Vietnam and Cambodia. Expert-guided excursions lead to places where the Khmer Empire and the colorful lives of its descendants await discovery. On the river, the staff-to-guest ratio is an impressive 1:1. aquaexpeditions.com

For more than 15 years, the twin-ship SeaDream I and SeaDream II yachting experience has been famous for its casual elegance, 5-star dining, world-class service and renowned itineraries. Because of the ships’ smaller size, they can access small harbors and ports of the Mediterranean and Caribbean. In 2021, The Club is introducing its “Global Yachting” concept with the 110-suite SeaDream Innovation, which, among other things, will offer bespoke sailing to all seven continents, along with a unique treat—optional open-air beds for sleeping under the stars. seadream.com

To build your own Wanderlist, or find a Virtuoso travel advisor, visit virtuoso.com

Inspired by the @cashiersdesignershowhouse terrain

Calm, comfortable and warm were the ethos in an up

Our June/July issue is here! From Scandinavian-lea