Robert Brown cultivates a calming yet sumptuous apartment for a worldly couple in search of a comfortable haven. Interior designer Robert Brown set the living room’s relaxing tone by painting walls and ceiling in Benjamin Moore’s soothing White Dove. A set of four Baker, Knapp and Tubbs swivel chairs and an upholstered ottoman (covered in fabric by DeLany & Long) add sculptural presence around the fireplace, as does the small metallic drinks table by Baker. A long corridor leading to the living room serves as an art gallery with 12 niches, each displaying a work from the homeowners’ extensive collection. To create a sense of intimacy, Brown broke up the pattern of the oak flooring by having it laid both vertically and horizontally. Skyline views are easily accessible in the master bathroom, especially when soaking in the curvy Victoria + Albert tub; both the stone flooring and vanity countertops are by Marmi Natural Stone. In the master bedroom, softness prevails thanks to a statuesque headboard custom-designed by Brown, and the Stark rug. Baker’s metal and leather chair adds visual interest. Brown divided the shapely living room into three distinct areas, including two for seating and a section for dining. Because the wife likes the legs of furniture to show, he chose skirtless dining chairs by Barbara Barry for Henredon. Brown chose this streamlined Baker cabinet because, “It doesn’t speak too much.” Hanging above are two black-and-white paintings, both from Townhouse by Robert Brown. “Balance and repetition was key to this space,” explains Brown, who outfitted the sitting area with dark woods and neutral fabrics. The designer devised the pair of custom cocktail tables, which are bracketed by matching Verellen sofas. Throw pillows are covered in a gray tweed by Lauren Hwang New York. 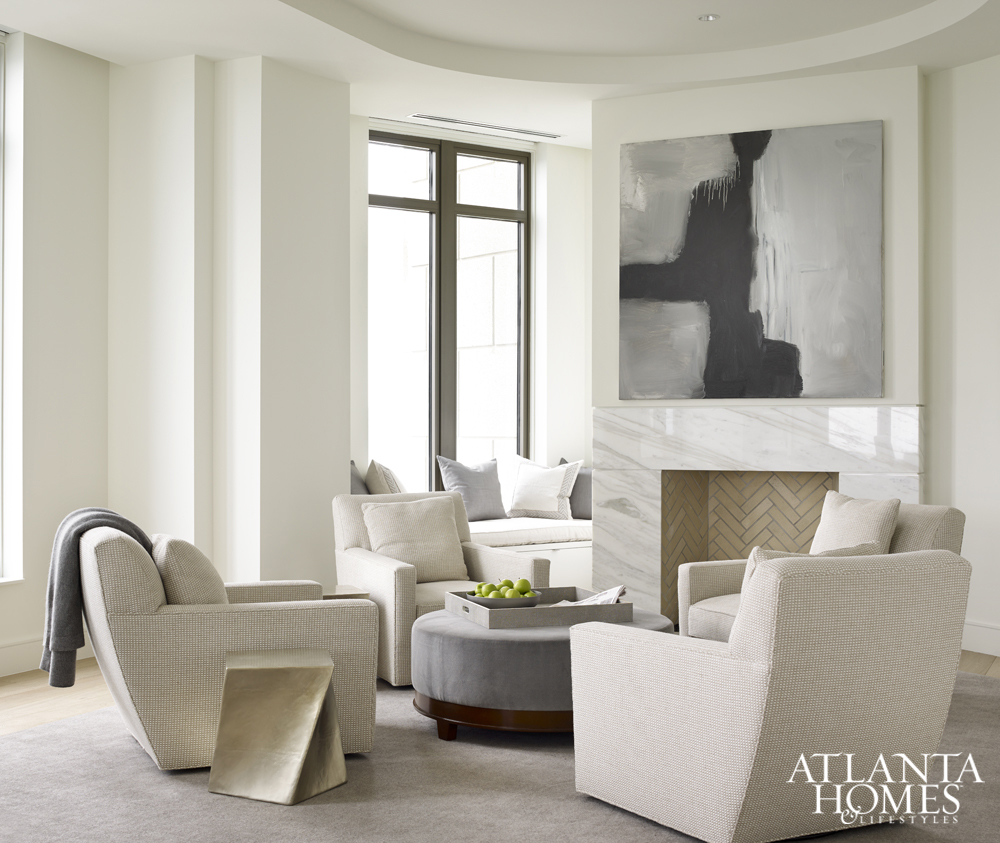 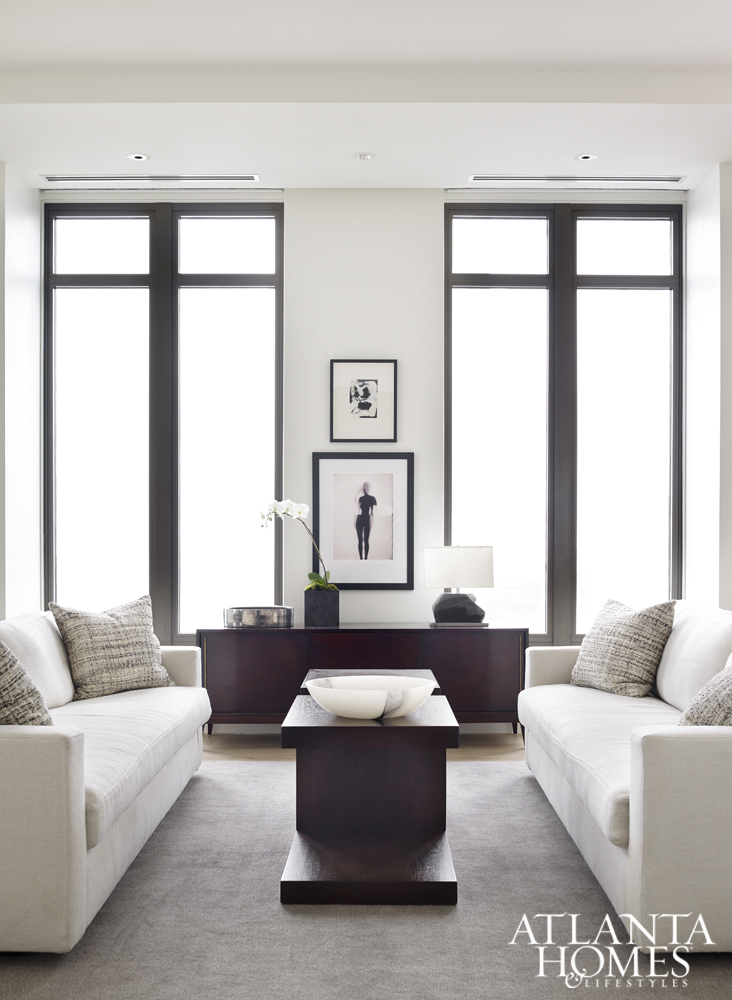 Although it was work that first brought two European transplants to Atlanta, it was their desire for relaxation that prompted their move to Buckhead’s Residences at Mandarin Oriental, Atlanta, where the couple purchased an apartment on the 39th floor. Impressed by the building’s Robert Brown–designed model unit, they enlisted the Atlanta designer to create a restful home that reflected their streamlined tastes.

“It was all about keeping it über simple,” explains Brown, who kept decorative flourishes to a minimum. Settling on a color palette of “tons of white with a little black and gray,” Brown created a serene backdrop of pristine white walls and ceilings and pale wood floors. Likewise, only neutral, solid-colored fabrics were chosen, with texture, not pattern, their only form of embellishment. Notably absent are draperies, which the wife eschewed in favor of recessed mechanical blinds. Even furniture was selected for what it lacked—namely, prominent hardware and conspicuous wood grain.

For all of the home’s minimalism, however, Brown maximized its comfort with furnishings that soften the interiors’ clean lines. Throughout the apartment, an array of comfortable seating encourages restful moments, while expansive rugs add warmth and coziness to their contemporary environment. Even the home’s art, a mix of black-and-white photography and monochromatic paintings, proves relaxing. “Sometimes, art can be too interesting,” notes Brown. “Because we wanted to create a calming mood in the home, we chose art that was not too complicated or intense.”

As much as the clients’ sensibilities guided the design process, so too did the apartment’s architecture, especially its myriad windows, which offer views of the downtown skyline. “It’s a different mindset doing high-rise homes,” admits Brown, a veteran of skyscraper decorating.  “People like focusing on the view, so as a designer, you’re often orienting furniture around it.”

It’s these easy-to-enjoy city views, coupled with the designer’s clean, purposeful decor, that give this apartment the feeling of a luxury hotel, one that fosters the kind of peace and tranquility homeowners welcome at the end of a busy day. As Brown says of the home, “The color palette, functionality, and cleanness—it’s very European,” which suits this worldly couple to a T.