Andrew Howard transforms a newly built home into an inviting family retreat thanks to his classic-meets-refreshed aesthetic. In the dining room, the family’s midcentury sideboard is juxtaposed against vivid blue walls. Designer Andrew Howard blends the vibrant hue with patterns found in the custom rug and a classic paisley-print drapery fabric by Jasper by Michael S. Smith. The table is from Century, and the chairs are Mr. and Mrs. Howard for Sherrill Furniture. The chandelier is Baker Furniture. “This was a try-something-new moment where we stepped out of the box,” says Howard in reference to the kitchen’s bleached-oak cabinetry. Knowing today’s popular all-white kitchen would feel out of place in this home, his design relied on creating a space infused with warmth. He used traditional-style barstools from the family’s former home and selected new metal Eccola light pendants overhead for contrast. Howard fulfilled Keely’s directive of creating a combination of light and dark rooms throughout the home by wrapping her office in a deep-blue lacquer. A custom rug featuring pops of pink and magenta adds balance to the space. With oversize Hickory sofas to match the room’s long proportions, the formal living room was designed for entertaining. However, Howard was mindful to keep fabrics and other elements practical. “With kids, everything is fair game. I didn’t want to put in anything that was uncomfortable to sit in or off-limits,” he says. The artwork above the mantel is from Mrs. Howard, his family’s interior furnishings shop with locations in both Jacksonville and Atlanta. 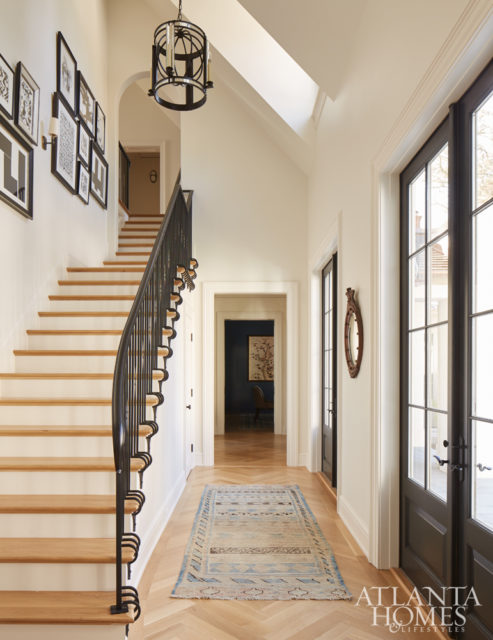 The front entryway features a custom railing in a modern design. A striking stone backsplash accents the bar off the dining room. The master bath’s clean-lined design features limestone flooring and waterfall-edge vanities. Tall windows allow for an abundance of natural light, even when the shades on the lower portion are drawn for privacy. The soaking tub is from Ferguson. Soft colors and river views create a sense of serenity in the master bedroom. The Woodall’s existing green leather chairs add a pop of color in the cozy family room. Newer items include a roman shade crafted from a Martyn Lawrence Bullard fabric and a framed kuba cloth tapestry. The daughter’s bedroom is pretty in pink and purple, featuring a Galbraith & Paul wallpaper, Schumacher drapery and a purple chair from Bungalow 5. 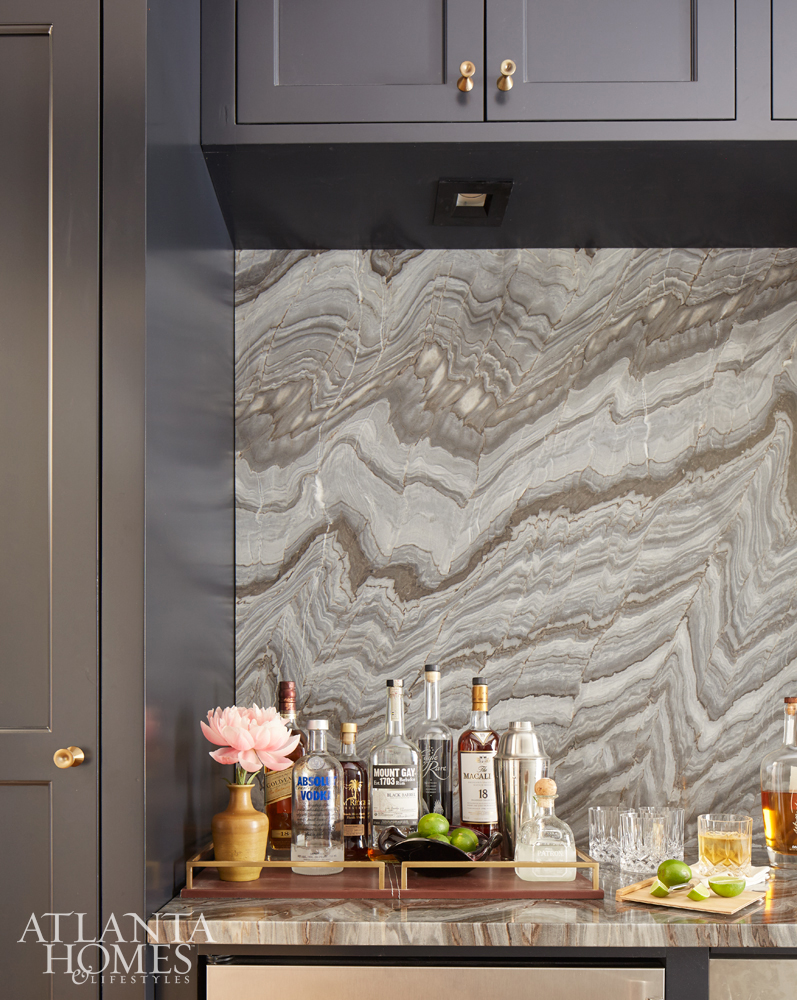 When Keely Woodall began the process of putting down roots along the Florida coast, she wanted to bring a piece of home with her. Her young family of four had recently relocated from Atlanta to Jacksonville, and she wasn’t quite ready to fully trade in her love of classic style for coastal.

Rising to the challenge were Cronk Duch Architecture and Andrew Howard Interior Design. Although a new construction, the home’s exterior—a combination of stucco and brick with a shake roof—was designed with vintage charm and meant to be reminiscent of homes in Atlanta. “The ultimate goal was to make it look like the home had been here for 30 or 40 years,” says interior designer Andrew Howard. The architectural plan called for the application of mortar over large swaths of brick to give the illusion it had been repainted over decades.

The interiors hold an equally storied appeal but with a slightly more modern edge. “I wanted it to feel like a collected home that had recently been updated,” explains Howard. He incorporated antiques and vintage pieces from the Woodalls’ former residence among new, custom furnishings to achieve his classic-meets-refreshed aesthetic. For example, a midcentury sideboard mixes comfortably with whimsical draperies in the bold blue-lacquered dining room, while the family’s beloved green leather chairs add a pop of color in the white oak–paneled family room.

“You don’t want to move into a new house and have all new stuff. That can quickly make it feel like a furniture showroom,” says Howard. “As a designer, I think we would be doing our clients a disservice if we walk in and dictate what stays and what goes, as there’s memories attached to certain pieces. Rather, my philosophy is ‘let’s plan and see how these things can coexist in a room as the project develops.’ It’s all about give and take for all parties.”

This rings especially true in the daughter’s bedroom, which came with a request that it be coral and purple. To prevent the space from becoming overwhelming, Howard presented a softer salmon color that appeased everyone and provided the backdrop for a purple chair, making for a happy daughter and designer.

“This project was more about a relationship than decorating, and I think every house for me is that way,” says Howard. “I want this to be a fun process, not something everybody loses sleep over. I believe that the best homes are created by developing a friendship with your client. If I see Keely and her family out at lunch, you can bet we’re all happy to see each other.”